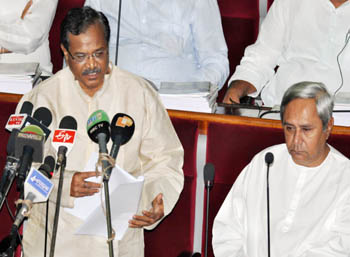 In the Agriculture budget, the Departments dealing with irrigation, agriculture, co-operation, fisheries and animal resources development were provided Rs.13, 181.89 crore under Non-Plan and Plan.The amount is about 20.89 per cent more than the outlay for the previous year.The outlay for the Agriculture budget is about 14.02 per cent of the total outlay proposed to be provided in the budget estimates 2016-17, Amat said in his budget speech.The Finance Minister, however, did not mention anything about the suicides by drought-hit farmers in different regions of Odisha since September last.“The challenges before us are manifold.Notwithstanding the limited factors, we have tried to address the competing priorities across different sectors within the resource envelop in an optimal manner,’ Amat said while ending his speech relating to the general budget.Dedicating the budget to the people of Odisha, Amat said: “We have a firm resolve to meet these challenges and take our beloved State to greater heights.