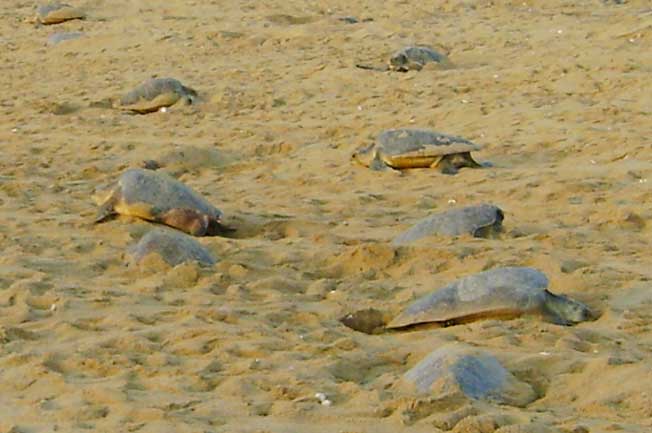 While Gahirmatha, widely perceived as world’s largest known rookery of these endangered marine animals, played host to around 52,000 female turtles that arrived en-masse to dig pit and lay eggs, the delicate marine species skipped their mass nesting at Rushikulya river mouth, another prominent nesting beach.Why did the turtles play truant and skip the river mouth beach? Why did the lesser number of animals emerge at Gahirmatha for mass nesting? Has human interference or the absence of congenial beach condition resulted in poor turnout of endangered Olive Ridley turtles?Mysterious disappearance of turtles still remains unresolved staying the realm of mystery.Nobody could predict for sure on the behavioural trend and instinct of the sea turtles.Researchers are yet to unravel the mystery linked to Olive turtles, said Divisional Forest Officer Bimal Prasanna Acharya.“Last year, as many as 4.13 lakh turtles had turned up at the Gahirmatha beach for mass nesting.This time turtles have not arrived at Rushikulya nesting ground.It’s a cause of worry for us.“The possible factors that might have prompted the turtles to play truant are being studied.We are yet to arrive at any definite conclusion,” he said.However, forest officials are of the belief that unfavourable beach condition might have been the principal factor for lesser number of turtles turning up for mass nesting at Gahirmatha.Incidentally, the marauding sea has eaten up sizable portions of the geographical boundary of Gahirmatha beach at unmanned Nasi-2 Island.