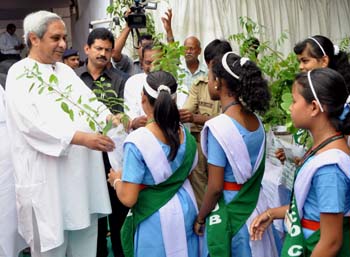 Odisha Channel Bureau Bhubaneswar, July 3: Odisha government is taking steps for plantation of 12 crore saplings during this monsoon, Chief Minister Naveen Patnaik announced here on Thursday.Patnaik made the ambitious announcement while addressing a function to mark the 65th Bana Mahotsav celebrations at a school premises in the Capital city.Patnaik said while 6.5 crore saplings will be planted under different Central and State schemes, another 5.5 crore saplings will be distributed among the farmers across the State to plant in their own land.The Chief Minister also distributed saplings among the girl students of the school on the occasion in his efforts to encourage the people at large to follow his government’s `each one, plant one’ slogan.In fact, the Naveen Patnaik Government had started planting trees in a large scale in 2008 when it had announced that it will plant 20 lakh saplings on July 7 that year.In fact, the number of saplings being planted during monsoon season has been increasing every year on government records.But the number of trees does not seem to be growing in any part of the State, or even forests for that matter in the recent years.