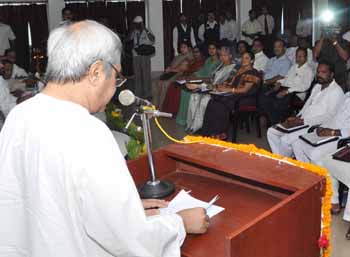 Odisha Channel Bureau Bhubaneswar, July 6: In an effort to make the Biju Janata Dal’s first-time Members of Odisha Legislative Assembly, Chief Minister and BJD president Naveen Patnaik on Sunday asked them to work for the people with the spirit of a servant by rising above the party lines.Narrating his own experience, Patnaik said that after he got elected as Lok Sabha Member of Aska in 1997 some people had advised him not to help the people who had voted for opposition parties.“My reply to them was I am now Aska MP, so my sacred duty was to work for the people of Aska,” he said.Telling the first-time legislators of his He said that elections were now over and they should now work for the development of their constituencies and serve the people by staying away from politics and rising above party lines.Patnaik was addressing the first-time legislators of his party at an orientation programmes organised by the BJD in the city.Giving useful tips to the legislators, most of whom were young, Patnaik asked them to meet the Ministers to solve the problems of the people in their respective constituencies.The first-time legislators should maintain decorum in the Assembly which was the temple of democracy and participate in the debates and discussions and also be active in the lawmaking process.Reminding the legislators that the people of Odisha had voted for their party for the consecutive term to form government in the State, Patnaik said the people had high expectations and they should try hard to live up to people’s expectations.