Patnaik was chosen for the award for his outstanding commitment, courage and conviction coupled with revolutionary ideas of clean governance aimed at making Odisha an ideal State.

The award was conferred on Patnaik at the valedictory session of the three-day event held in the afternoon.

A short film on Patnaik’s life and work was shown before he was presented the Ideal Chief Minister Award by Pratibha Devisingh Patil.

Patnaik and other dignitaries were welcomed by Rahul V. Karad, founder convenor of Bharatiya Chhatra Sansad and executive president of MIT WPU.

Addressing the gathering of students after accepting the award, Patnaik said that he was still a novice in politics and for him it has been a spiritual experience. He dedicated the award to the people of Odisha. 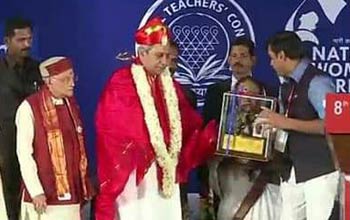 Speaking about his government’s measures for granting land and property rights to slum dwellers and setting up Tribal Development Councils for the benefit of the tribal, Patnaik said that he had always kept the people as his priority.

The Chief Minister was presented a popular turban of Pune along with a trophy and cash of one lakh rupees on the occasion.

“It is a special occasion for me to address youth from across the country at the 8th Indian Student Parliament in Pune,” Patnaik had tweeted before the award was conferred on him.

The valedictory session of the award ceremony of the Student Parliament was live-streamed in www.bharatiyachhatrasansad.org

Several other eminent personalities were also awarded on the occasion for their contribution in different fields.

Earlier in the day, a session titled `Be Mature: Save Nature’ was organised where Gandhian activist Rajagopal P.V., eminent environmentalist Kartikeya V. Sarabhai was awarded. A resolution calling for saving the environment was passed at the end of the session.

Apart from the two MLAs, many student leaders also addressed the gathering of students.