A specially re-edited version of Human (2015), the winner of the prestigious IDFA Audience Award at International Documentary Film Festival, Amsterdam and the CPH Dox award, Copenhagen, among others, the film combines stunning portraits and aerial photography of people, culture and nature. Directed by acclaimed French environmentalist, journalist and photographer Yann Arthus-Bertrand, the cinematography is emphasised by composer Armand Amar’s award-winning compositions. 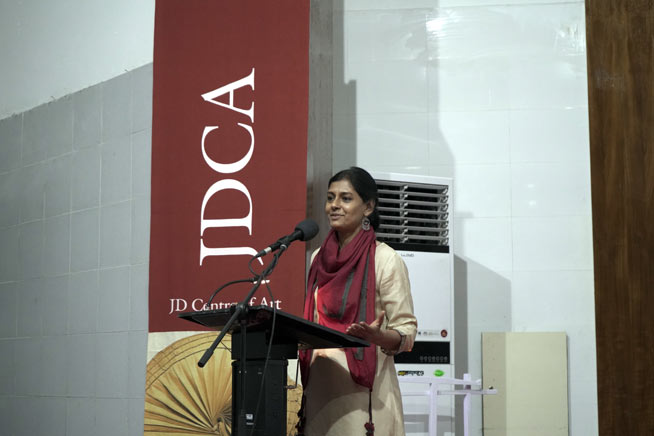 As many as 24 films from 11 countries were screened (Canada, China, Finland, France, India, Israel, Japan, Norway, Spain, United Kingdom, United States), that ranged from visual and performing arts, traditional arts and crafts and design and architecture, to communities & culture and animation. The programme is a diverse selection of fiction, documentary and animation.

The second session of the filmmaking workshop, 4K Films on a Budgetby independent filmmakers and media-trainers Nandan Saxena and Kavita Bahl continued on the second day.

The cinematic programme continued in the afternoon withfilms on traditional arts and crafts.Lost into Art – Dhokra, produced by Mudra Foundation offers a visual tour of Odisha’s artistic heritage through the metal casting craft of Dhokra. The film pays tribute to the artisans, who patiently attend furnaces in the sweltering heat, who meticulously wind wax strings into masterpieces, carrying on a tradition in isolation, leaving anonymous imprints in brass.

The documentary was followed by Adamita Daman, directed by Patdeep Chaudhuri, which has been screened at the 6th Smita Patil Short Film Festival, Pune, Echo BRICS Film Festival, Moscow, South Asian Short Film Festival Nandan, Kolkata, ADDA Short Film Festival, Guwahati, India where it won Best Documentary award. It presents a profile of a puppeteer performing a rare folk culture, “Chadar Badni” a form of mobile puppet show. These films were represented at the festival by their respective producers and/or directors.

The afternoon programme included a rare screening of,Mythological Time, by Sun Xun, one of the most exciting younger artists on the international arena. Sun Xun creates unique animation films that combine Chinese paintings with hundreds of wood-cut blocks and thousands of hand-draw frames. His film was shown alongside a video artist profile produced by the Guggenheim Museum, New York.

A series of short films on eminent modernist architects, Santiago Calatrava, BV Doshi and Mahendra Raj were screened.Architect Santiago Calatrava, directed by Alexandra Liveris, USA, offered a rare an intimate view into the world of the visionary Spanish artist and architect.

The international cinematic programme continued with KatatjatuukKangirsumi (Throat Singing in Kangirsuk), directed by Manon Chamberland and Eva Kaukai, Canada, in collaboration with Wapikoni Mobile.This shortfilm on the Canadian indigenous community of Inuitsfeatures haunting throat singing as the musical score.

It premiered as part of the Sundance Shorts Selections. The emotive portrait NINO was screened on the great Israeli filmmaker Nino Herman, followed by the atmospheric experimental film, Heartbeats of Memory, by award-winning London-based director, Nono.

Films on important artists, that featured in Sunday’s screening programme include:
Legacy of an Artist, directed by Nutan Manmohan, a sensitively made film on the life and work of the genius Gond artist Jangarh Singh Shyam. The film received a special mention at the SiGns Film Festival, Thrissur and has been telecast on Doordarshan as well. It screened at the festival on Sunday, February 9, at 3:20 pm.

A Painter of Eloquent Silence: Ganesh Pyne, directed by eminent filmmaker, Buddhadeb Dasgupta, the winner of the two National Awards, for Best Arts Cultural Film and Best Music Direction in a Non-Feature Film, screened at the festival on Sunday, February 9, at 2 pm.

Phil Grabsky’s Great Artists – El Greco, part of the well-known Great Artists series with Tim Marlow, this film discusses the paintings of the artist El Greco (1541-1614) that are among the most distinctive works of the early modern period. His art marked a radical departure from the naturalism of the Renaissance, and as a result was ignored for almost 300 years. It screened on Sunday, February 9, at 2:45 pm. 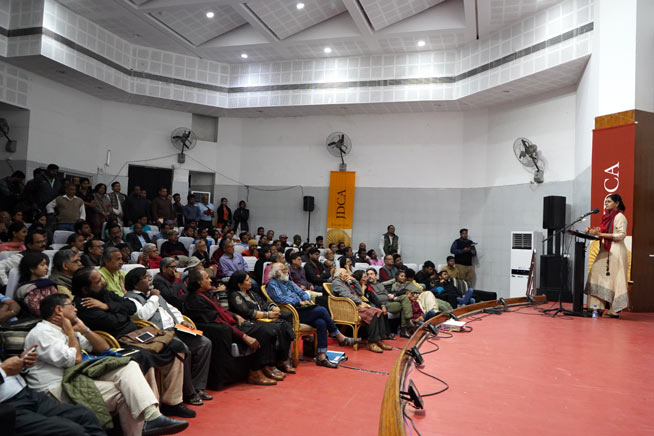 Alongside the diverse programme of films was an illustrated lecture conducted by eminent actor, director, writer and social advocate, Nandita Das. She has acted in more than 40 feature films in 10 different languages. She made her directorial debut with Firaaq in 2008. Her second feature, Manto (2018) premiered at the Cannes Film Festival and was invited to screen at several festivals around the world. Her first book Manto& I chronicles her 6-year long journey of making the film. She delivered an illustrated lecture on ‘The Joy and Challenges of Recreating the Times in Manto’, with excerpts from her new book.

The 13th edition of JD Centre of Art’s Film Festival on Art and Artists closed with Raghu Rai – an Unframed Portrait, an intimate film on one of the world’s most celebrated photographers, directed by his daughter, Avani Rai. The film premiered at the prestigious International Documentary Film festival Amsterdam (IDFA) 2019 and has since travelled to other festivals where it has been most warmly received. Raghu Rai is no stranger to JDCA’s audiences in Bhubaneswar; he was present at the festival and engaged in conversation with the audience after the film screening.