Odisha Channel Bureau
Bhubaneswar: The Biju Janata Dal has won the bye-elections held in Balasore and Tirtol Assembly constituencies of Odisha by defeating the Bharatiya Janata Party. The Congress has been placed in the third position in both the seats. 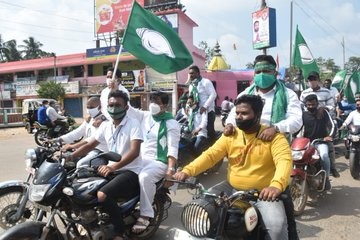 The bye-elections in the two Assembly seats were held on November 3 under restrictions imposed in the view of the COVID-19 pandemic and the votes were counted under similar restrictions on Tuesday.

BJD candidate Swarup Das defeated BJP candidate Manas Ranjan Dutta of the BJP in Balasore by 13,351 votes. The BJP had won the seat by 13,406 votes in the elections held last year.

Congratulating the winners, Chief Minister and BJD president Naveen Patnaik thanked the people of both the constituencies for exercising their franchise in the COVID-19 times and said that his party was committed for their development and wellbeing.