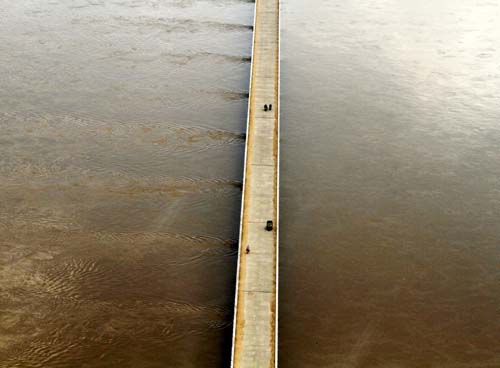 Odisha Channel Bureau Bhubaneswar, Aug 4: A massive flood was likely to affect lakhs of people living in the Mahanadai delta region in Odisha on Thursday.This was expected in view of the release of huge volumes of water from Hirakud reservoir in Western Odisha.As many as 50 sluice gates of Hirakud were opened to release flood water.According to Water Resources Department officials, more than 12 lakh cusecs of water was likely to flow down at Khairmal and Naraj on Thursday.The high flood was likely to affect people in Cuttack, Nayagarh, Khurda, Puri, Jagatsinghpur, and Kendrapara where lakhs of people had already been marooned since past two days.State government said that 1553 villages in as many 23 districts, with a population of over 10 lakhs, had been affected by the floods that preceded heavy rains over most parts of Odisha as well as neighbouring Chhattisgarh.A total of 184 boats had been pressed in to service in the affected areas including several blocks in Jajpur and Bhadrak districts that were worst hit till Wednesday night.As many as 398 villages had been marooned, most of them being in Jajpur and Bhadrak, according to State Special Relief Commissioner P.K.Mohapatra.Besides, 1.39 lakh people were evacuated from low lying areas in different affected regions, he added.As regards evacuation and relief operations, as many as 30 Odisha Disaster Rapid Action Force (ODRAF) teams and 11 National Disaster Response (NDRF) teams have been deployed in the affected areas and places were high flood was expected.Chief Minister Naveen Patnaik reviewed the flood situation as the Centre assured to provide all help to Odisha Government to tackle the flood situation in the State.