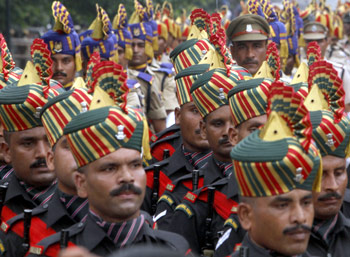 Odisha Channel Bureau Bhubaneswar, Aug 15: The 68th Independence Day was celebrated with gaiety and enthusiasm across Odisha on Friday even as a Special Police Officer was shot dead at Bandhagaon in Sundargarh district.The Independence Day was celebrated amid tight security in the districts where the Maoists had a strong presence as the Maoists had given a call for boycott of the celebrations.Addressing the State level Independence Day celebrations after taking salute at an impressive parade held on the Mahatma Gandhi Marg in Bhubaneswar, Chief Minister Naveen Patnaik highlighted various achievements of his government.Referring his government’s policies for the benefit of farmers, women and youth, Patnaik said expressed happiness that development had started taking place at the village level.The State government proposes to create model villages in rural areas by ensuring the basic facilities, Patnaik said.On the other hand, police of the Capital city took into custody 10 activists of Kalinga Sena for staging a protest in front of State Secretariat during the arrival of the Chief Minister at the parade venue.The activists were protesting against the State Government’s failure in providing jobs to the youths and filling up vacant posts in the government departments.