Odisha Channel Bureau Bhubaneswar, Aug 23: Satya Vihar is one of the suburban localities of Bhubaneswar where there is no drinking water supply or drainage facility available.Due to this thousands of residents suffer many problems in their day-to-day life, water logging being the most serious problem.Residents here have no shame in dumping waste of their own houses in lands where no building has been constructed.According to a resident of the locality, some people even unabashedly let the sewage water of their houses into such lands adjacent to their houses giving out to unbearable stench. 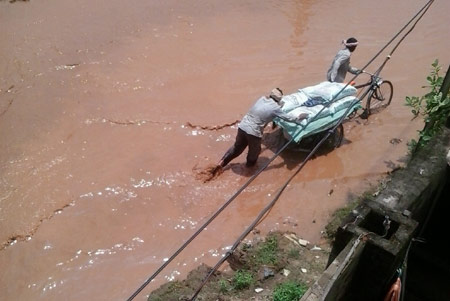 Adding to this is the problem of contractors who illegally procure several truckloads/trips of sand from the banks of river Kuakhai to sell to people who are constructing new houses.These wealthy contractors never hesitate to cause harm and inconvenience to nearby residents by their profit-making activities.”Here is an example of how a contractor is procuring and storing sand for sale, thereby causing huge potholes by 10-20 trucks and tractors resulting in severe water logging, due to which many women, children, and senior citizens walk or commute with great difficulty.” “The condition worsens during the heavy rains.This is what the trucks and tractors have done to the earthen road in front the grand newly-opened St.Xavier’s International School of Satya Vihar.”“I just took these photographs through my phone, from the rooftop of my house.I had a verbal duel with the contractor who is responsible for such a mishap.I hardly had anyone to support me that time,” said the resident in a statement issued to the media along with pictures on Saturday.“All suffered, but shockingly, no one raised a voice before that wealthy contractor and his men.He abused and flatly refused to fill up such huge pools of muddy water he has created.Forget insects, small and big snakes are also found in the muddy water at times.And things worsen much more than this after a heavy rain shower.”“These were just a few instances of hardships faced by commoners.It is to be noted here that, the Housing and Urban Development Minister Badri Narayan Patra along with some MLAs and Ward Members had just paid a visit and hosted an Iftaar party here in Satya Vihar a few weeks back, and such is the development you see in these pictures.I am sure water is clogged in hundreds of such areas in the Capital city Bhubaneswar.So what is left to say about rural Odisha!”