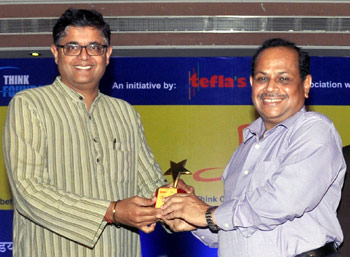 Odisha Channel Bureau Bhubaneswar, Aug 23: Paradip Port Trust has been conferred with the Think Odisha CSR Award–2014 for Disaster Management in the 7th edition of Think CSR Awards & Think Odisha Leadership Award initiated by the Tefla’s and The Times of India.Sudhansu Sekhara Mishra, Chairman, Paradip Port Trust received the award from Baijayant Panda, Member of Parliament in the award giving ceremony held at Hotel Swosti Premium here on Saturday.Paradip Port Trust has been adjudged for the award by the jury considering the commitment of Paradip Port towards its CSR activities, especially its action to combat the pre and post cyclonic situation during the cyclonic storm Phailin which hit the Odisha coast on October 12 last year.The port opened seven cyclone shelters at different locations, evacuated around 3000 people from low lying areas and kept them in seven cyclone shelters.Under the leadership and direct supervision of the PPT Chairman, availability of basic facilities like dry foods, water, electricity, medical aid and sanitation were ensured in all the cyclone shelters.Three teams of doctors of the port and the State Government regularly visited the cyclone shelters.A total of 5500 polythene sheets were distributed to the affected people.Apart from this, Paradip Port contributed one crore rupees to the Chief Minister’s Relief Fund on October 21, 2013.Though the intensity of the cyclone was very severe, there was no casualty in the port town.The port also recovered and restored early normalcy through adequate pre and post Cyclone measures and continuous untiring efforts. While accepting the award, the Chairman, Paradip Port Trust expressed his gratitude to the Jury for adjudging Paradip Port Trust for the award and also expressed his gratitude to all the trustees, employees, officers of the port, trade unions and all other Stakeholders for their voluntary and unstinted support, which has resulted in achieving the success by Paradip Port.