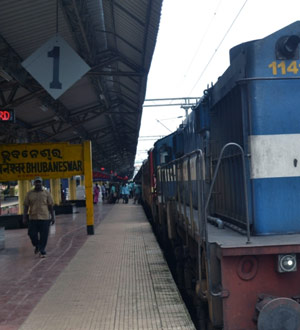 Odisha Channel Bureau Bhubaneswar, Sep 15: In a bid to boost security arrangements, closed-circuit television cameras have been installed at various places of Bhubaneswar railway station for surveillance and security purposes.Altogether, 32 IP-based surveillance cameras have been installed at vantage points – all the platforms, entrance and exit points and circulating areas of Bhubaneswar Station premises.The arrangements were inspected by General Manager of East Coast Railway Rajiv Vishnoi this morning, according to an official release issued by East Coast Railway (ECoR).The access to the footage of the surveillance cameras has also been extended to passenger reservation system (PRS) counters, booking office, concourse, 2nd class waiting hall and foot overbridges to keep a vigil on various suspicious activities for safety of passengers and safeguarding Railway properties.The feeds from these cameras reach the Centralised Control Room of the station where the Railway Protection Force personnel monitor the visuals round the clock.Apart from recording and playback facility, the video data can be stored for 30 days.Of the 32 cameras, 13 of the cameras are moveable and remaining 19 are fixed cameras including dome camera.This surveillance system helps the security personnel to track the miscreants from the platform and circulating areas of the station and the Railway Protection Force (RPF) have already started netting the miscreants.To minimise inconvenience to passengers and to avoid rush at entry and exit points, crowd management can be easily handled out due to installation of the CCTV surveillance System.Apart from this, the cleanliness of the Station premises will also be monitored.Cleanliness of platforms and circulating areas including railway track at station areas are being chased up for making the station clean and hygienic.S.H.Safdar, Chief Signal & Telecom Engineer, S.K.Mishra, Chief Security Commissioner of East Coast Railway, S.K.Singh, Divisional Railway Manager, Khurda Road and A.K.Patnaik, Chief Health Director were also present during the commissioning of CCTV system at the station.