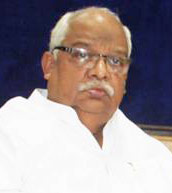 Odisha Channel Bureau Bhubaneswar, Sep 15: In a bizarre incident, Odisha Revenue Minister Bijayshree Routray today misbehaved with a television journalist in his office at the State Secretariat inviting condemnation from various quarters.Routray lost his cool and shouted at Smruti Ranjan Behera, senior reporter with Odia television news channel Focus Odisha, when a group of journalists, accompanied by camerapersons, asked him questions relating to the Ghangapatna land scam.The Minister shouted at the media persons asked them to get out of his chamber.As journalists of the city expressed their shock over the Minister’s behavior, many political parties condemned the incident In a statement, Samruddha Odisha condemned the incident and such incident happen when the government loses faith over democracy.As the Ghangapatna land scam was being probed by the Crime Branch, the Minister himself had come under criticism recently over the alleged misuse of a land that had been allotted in the name of his wife to run a hospital in the Capital city