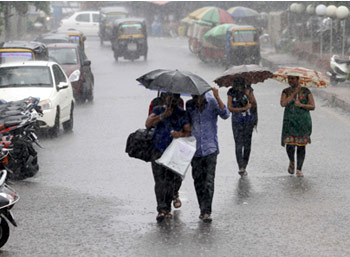 Odisha Channel Bureau Bhubaneswar, Sep 19: Heavy rains lashed many areas in coastal Odisha during the day on Friday badly affecting normal life in Bhubaneswar, Cuttack, Paradip, Puri and Gopalpur.Heavy rainfall was also recorded in Hirakurd and Sambalpur in Western Odisha during the day.The maximum rainfall of 48.2 mm of rainfall was recorded in Bhubaneswar between 8.30 am to 5.30 pm.The rains were likely to continue in the State on Saturday as the Bhubaneswar Meteorological Centre predicted on Friday evening. Rain/thundershower would occur at most places over Odisha during the next 24 hours, the Centre said.“Heavy to very heavy rainfall would occur at one or two places over interior Odisha, and heavy rainfall would occur at one or two places over coastal Odisha,” the Centre said in its warning.It further said that strong and gusty surface wind speed reaching 45-55 kmph gusting to 60 kmph may prevail along and off north and south Odisha coast.Fishermen have been advised not to venture into the sea.