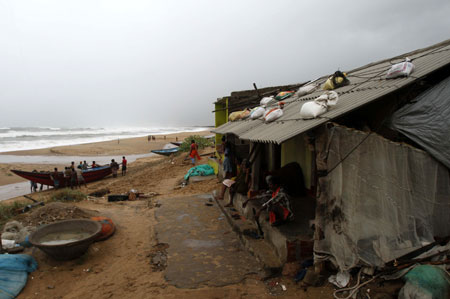 Odisha Channel Bureau Bhubaneswar, Oct 12: Exactly one year after cyclone Phailin hit Odisha coast on October 12 last year, Cyclone Hudhud is inching closer to the Odisha-Andhra Pradesh coast today.The very severe cyclonic storm ‘HUDHUD’ over Bay of Bengal, surging towards coast at 120 kmph, is likely to cross north Andhra Pradesh coasts around Visakhapatnam by noon today.As the sea along Odisha coast turned further rough this morning and moderate rains continued in many coastal districts of Odisha, the Naveen Patnaik Government remained ready to cope with any eventuality.The effect of the cyclone off the coast was felt by the people living in coastal Odisha, including the Capital city of Bhubaneswar since early this morning as it started raining heavily accompanied with squally wind.Heavy to very heavy rainfall is likely to occur over coastal Andhra Pradesh and Odisha.There will be rains over Telangana, Chhattisgarh and Jharkhand.Storm surge of about 1­2 metres above astronomical tide would occur around the system center of north coastal Andhra Pradesh at the time of landfall, according to the India Meteorological Department. 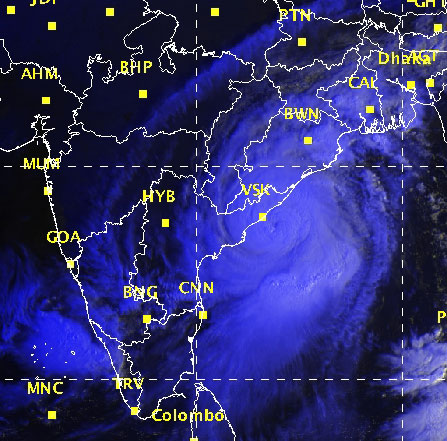 Prime Ministeri Narendra Modi, Odisha Chief Minister Naveen Patnaik and Andhra Pradesh Chief Minister N.Chandrababu Naidu have reviewed the emerging situation on Saturday and asked the departments concerned to stay on alert to meet any situation.“Tropical Cyclone Hudhud, formally known as Cyclone 3B, is the first organized tropical system in the Bay of Bengal since the middle of May.This is also only the second named cyclone of the northern Indian Ocean season, according to a report by Eric Leister, Meteorologist, published in Accuweather.com.The impact of Hudhud is likely to be less than the impact of Phailin, according to weather experts in Bhubaneswar.Though rains continued over coastal Odisha, no damage or incident of uprooting of trees were reported from any place till 8.30 am.While about one lakh people have been evacuated in coastal Andhra, thousands of seaside villagers have been evacuated in coastal Odisha.A nine-year-old girl had died and a minor boy was feared drowned as a mechanized boat engaged in evacuating people from seaside Satabhaya gram panchayat in Odisha’s Kendrapara district on Saturday.