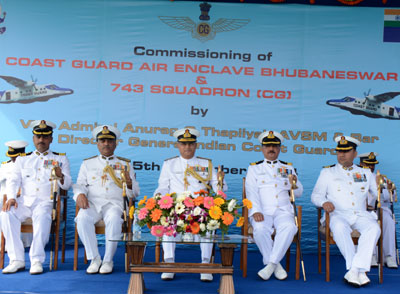 Odisha Channel Bureau Bhubaneswar, Dec 15: The Coast Guard Air Enclave (CGAE) Bhubaneswar and 743 Dornier Squadron were commissioned by Vice Admiral Anurag G Thapliyal, AVSM and Bar, Director General, Indian Coast Guard at the Biju Patnaik International Airport Bhubaneswar today.Various defence and civil dignitaries attended the function.The Coast Guard Air Enclave Bhubaneswar is commanded by Commandant Rajeev Saini and 743 Squadron is commanded by Commandant Pradeep Sundriyal.The units will operate under the operational and administrative control of the Commander, Coast Guard Region (North East) through the Commander, Coast Guard District No 7 (Odisha).The Coast Guard Air Enclave Bhubaneswar was formerly activated on April 10 last year and since then it has been engaged in undertaking air surveillance in the area.This has augmented the Coast Guard Operations along the northern Bay of Bengal with area of responsibility of over 1.5 lakh sq km of the Indian Exclusive Economic Zone.The 743 Squadron (CG) will be operating with 02 Dornier Aircraft.In his address, Vice Admiral Anurag G Thapliyal highlighted the maritime challenges in Odisha and significance of maritime and coastal security.Recalling the maritime traditions of Odisha as ancient Kalinga, the DGICG highlighted that numerous measures have been initiated by the Government of India for enhancing coastal security, and with the setting up of Coast Guard Air Enclave at Bhubaneswar strategic air operations will be streamlined and synergized for the protection of the sea areas off the Coast of Odisha.The commissioning of the Air Enclave will provide the required fillip for protection of sensitive marine environment and vital assets thronging on the shores of coastal Odisha.Further, Odisha coast being hub of shipping traffic emerging to east and Far East, the coordination of search and rescue efforts will certainly get the required boost.As Odisha is also periodically affected by natural calamities; the availability of Coast Guard maritime air assets will enhance the capability of disaster response.