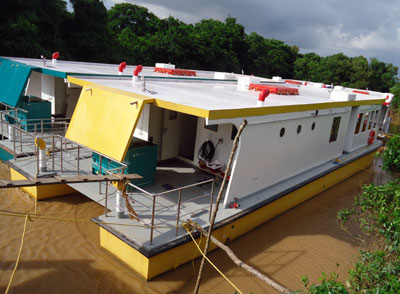 Odisha Channel Bureau Kendrapara, Dec 25: In a case of sheer waste of precious government funds, the improvised luxury boats worth Rs.4 crore procured by Odisha Government’s forest department for safe and comfortable movement of tourists in Bhitarkanika national park-side water-bodies are lying idle.As many as four multi-hulled luxury vessels had been procured from Integrated Coastal Zone Management programme (ICZMP)’s and the state-of-the-art-tourist vessels were valued at staggering Rs.4 crore.The luxury crafts were brought to Bhitarkanika way back in July.However, the vessels have not moved an inch since then as there has no engagement of crews to operate them.All the vessels are lying unused being anchored at Gupti ferry ghat on southern part of the national park boundary.Tourists who were excited to get pleasure from luxury boat ride are feeling let down.Officials, however, maintained that the forest department is bereft of technical manpower for crafts’ operation.As a result these boats have so far remained unused.These have been obtained from a Goa-based craft-manufacturing company adhering to global tender procedures.Each of these trendy vessels has accommodation capacity of 20 tourists.Besides comfort, the eco-friendly vessels are equipped with fool-proof safety mechanism, said Divisional Forest Officer, Rajnagar Mangrove (Wildlife) Forest Division Kedar Kumar Swain.However the crux of the problem is that the department does not have skilled boatmen to operate such multi-hulled crafts.The matter has been referred to higher-ups for early end to the deadlock.We have suggested either for engagement of skilled crews or outsource the multi-hulled crafts to private vessel operators.Each of the luxury crafts require at least 5 skilled crews to operate, manage and maintain the luxury crafts, DFO Swain added.It’s lack of foresight on part of the forest department that has led to the prevailing imbroglio.Before procuring the luxury vessels, the department should have engaged skilled personnel imparting skill training and operational knowledge.Instead of doing so, boats were acquired hurriedly.As a result, these luxury boats are languishing in idle state.If things continue in such manner, these unused vessels would develop technical snag.It’s an example of government money going down the drain, felt a tourists’ operator Pradeep Das.Bhitarkanika national park is famous for its saltwater crocodiles, resident and migrant avian species and large varieties of mangrove species.Besides millions of endangered Olive Ridley sea turtles turn up at Gahirmatha beach every year for mass-nesting.As many as 1,644 crocodiles were enumerated in the national park this year.“We receive about 50,000 tourists in a year.Our emphasis is on to ensure safe and comfortable sojourn of visitors who throng here in large numbers to savour warmth of eco-system and unique environs of its wetlands.The luxury vessels are the latest attractions for tourists.We hope to make them operational very shortly,” said officials.