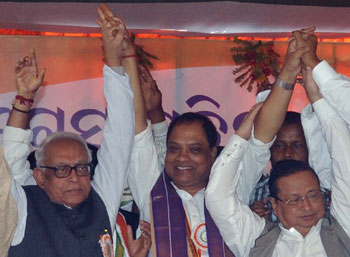 Odisha Channel Bureau Bhubaneswar, Dec 28: After a long gap, Congress leaders in Odisha on Sunday vowed to sink their differences and work together to unseat the corrupt Biju Janata Dal regime in future polls.The senior leaders of the party were seen together and targeting the Naveen Patnaik Government on the occasion of their party’s 130th foundation day celebrations at the Congress Bhavan here.The leaders, who addressed an impressive gathering of party leaders and workers, stressed the need for sinking their differences to oust the “Dagi Sarkar” (tainted government) by winning the people’s trust at the grass-roots level.“Congress is coming back”, announced Prasad Harichandan, who assumed charge as the new chief of Odisha Pradesh Congress Committee on the occasion.Harichandan said that corruption has spread from top to bottom during the BJD rule in the past for the 15 years.“The unearthing of one scam after another has left the BJD government fully tainted,” Harichandan observed, while urging his party leaders to reach out to the people and win their trust.He expressed confidence that the Congress would rejuvenate itself and hit the streets with vigour to rescue Odisha and its people from the clutches of corruption.It was pleasant surprise to find the Congress leaders of the State to join hands with the new PCC president with great enthusiasm after a gap of 15 years and talk of unity to save the party from decline in the State.A host of senior leaders including Odisha-in-Charge of All India Congress Committee B.K.Hariprasad, former Chief Minister Giridhar Gamang, former PCC presidents – Niranjan Patnaik, Jayadev Jena and Sarat Patnaik, former Union Ministers – Bhakta Charan Das and Chandra Sekhar Sahu – attended the meeting where Harichandan formally took charge of the party leadership in the State.Messages sent by veteran leader J.B.Patnaik and former legislator Lalatendu Bidyadhar Mohapatra, who could not attend the celebrations, were read out at the meeting.