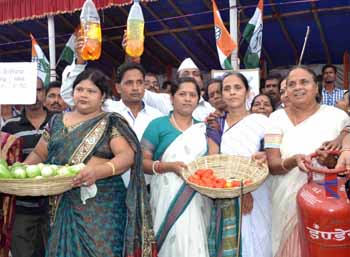 Odisha Channel Bureau Bhubaneswar, July 12: A host of Congress leaders of Odisha along with hundreds of party workers staged a dharna in front of the Raj Bhavan here on Saturday to protest against price rise.The Congress leaders, led by senior leaders PCC president Jayadev Jena and former PCC president Niranjan Patnaik, held both Narendra Modi Government and Naveen Patnaik Government for the abnormal rise in the prices of essential commodities.The leaders who addressed the gathering of protestors alleged that both the NDA government at the Centre and BJD government in Odisha had cheated the people after winning elections by making false promises.The Congress leaders also met Governor S.C.Jamir at the Raj Bhavan and submitted a memorandum seeking his intervention in the matter.The party demanded unconditional roll back of both passenger and freight fare in the railways by the Narendra Modi Government.They also demanded that the Naveen Patnaik Government should immediately withdraw the two per cent increase of vat on petrol and diesel in the State.Among other things, the party sought increased allocation for ongoing railway projects in the State, and non-separation of Waltair division from East Coast Railway and addition of new divisions under East Coast Railway.The agitating leaders also demanded announcement of an action plan to curb price rise with opening of government retails at district and block headquarters, and restoration of 24 hour power supply to the consumers both in both urban and rural areas of the state.The leaders announced that the Odisha Pradesh Congress Committee will be forced to further intensify public agitations across the State if their demands go unheeded.