Odisha Channel Bureau CUTTACK: Demanding removal of a government licensed country liquor shop on Gobabast-Bainlo Bazar Road in Sainso Gram Panchayat under Baranga Block of Cuttack district, village women from both Harianta and Sainso under the banner of Regional Anti-liquor Women’s Group sat on a daylong dharna at Gobabast Bazar on Wednesday.Since the district administration has been ignoring the villagers’ plea to remove the country spirit shop and curbing illegal liquor trade, the villagers said they were compelled to start fresh agitation. 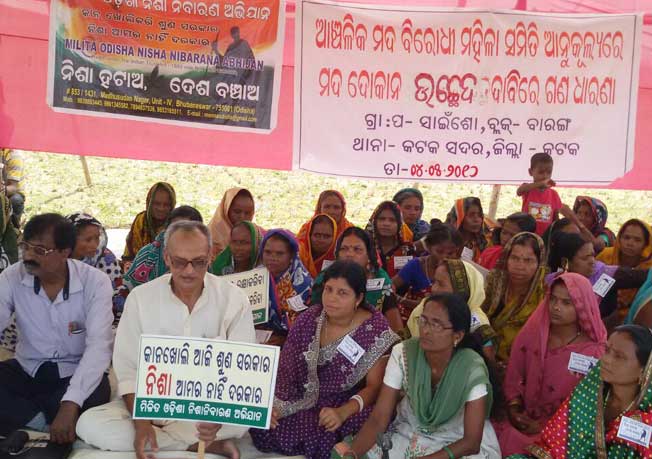 The agitation was supported by members of Milita Odisha Nisha Nibaran Abhijan and Sambhav, another anti-liquor advocacy group from Bhubaneswar.“We had met the Cuttack District Collector Nirmal Chandra Mishra at his office on last 5th April and handed over a memorandum.However, no action has been taken so far,” complained Kanchan Bhoi, president of Regional Anti-liquor Women’s Group comprising women from eight different villages – Andhoti, Sainso, Harianta, Purushottampur, Rahura, Gobabast, Kokal and Gabilo.Villagers of both Harianta and Sainso gram panchayat have been long demanding removal of the liquor shop citing deterioration of law and order situations in the locality due to the unlawful activities of a liquor shop.The said shop operating within a close distance from three schools has caused severe inconveniences for the general public and students as well.As it has turned into an open bar for the hooligans, the particular stretch of Gobabast- Bainlo Bazar Road became unsafe for commuters during evening hours.Since the opening day of this shop, innumerable untoward incidents have been recorded.On 23 June 2015, a dead body was found in front of that shop.However, the local police remained silent in a bid to save the liquor shop, alleged the agitating women.In absence of strict and regular enforcement drives from the police and excise department, illegal liquor selling became rampant and the shop at Sainso acts as a fountain head of all illegal activities.The staffs of that shop are engaged in ferrying liquor to all illegal liquor vendors in the adjoining areas within 20 km radius. The villagers have also requested district administration to take stringent action on illegal liquor sellers in the area and those drunkards regularly assembling near the shop and the nearby markets.