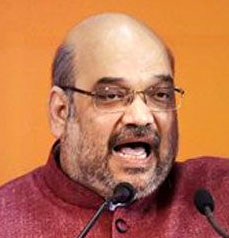 Odisha Channel Bureau Bhubaneswar, Jan 6: All the BJP leaders of Odisha who addressed the Mahasangram rally of the party here today targeted Chief Minister Naveen Patnaik and urged the party workers to launch a movement against him.But party’s national president Amit Shah spared Patnaik leaving thousands of people at the rally surprised.Shah took Congress vice-president Rahul Gandhi’s name a number of times in his address while blaming the previous Congress-led UPA government at the Centre for its “anti-people” policies.Surprisingly, Shah hardly uttered Patnaik’s name even once in his entire address nor blamed the BJD government for the various scams in the State that were highlighted the State BJP leaders.Odisha BJP leaders including Kanak Vardhan Singh Deo, Biswabhushan Harichandan, Bijoy Mohapatra, Jual Oram and Dharmendra Pradhan who addressed the rally before Shah strongly blamed the Naveen Patnaik Government for the chit fund scam, land scam and mining scam.They also criticised Patnaik for increasing the rate of VAT on petrol and diesel, and over his government’s latest announcement for public auction of non-coal mines.Pradhan and Singh Deo also countered Patnaik’s allegation of the Centre neglecting the cause of Odisha.But the last speaker at the rally, Shah primarily engaged himself in Congress-bashing.He remained completely silent about the alleged corruption during the Naveen Patnaik regime in the State.No doubt, Shah highlighted the achievements of Prime Minister Narendra Modi and urged the people to support his party to make Odisha the No 1 State in the country, but he did not hold Patnaik responsible for any scam or corruption.In fact, the BJP leaders and workers had expected that Shah would attack Patnaik to boost their morale and help strengthen their party organisation in the State.But many people who attended the rally were seen expressing their dismay over Shah’s silence on Patnaik.