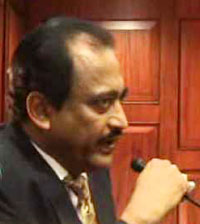 Odisha Channel Bureau Bhubaneswar, Feb 4: Odisha Government has appointed Justice Madan Mohan Das as head of the Commission of Inquiry probing into the mega chit fund scam in the State.Justice Das, a retired judge of Orissa High Court, was appointed as the head of the probe panel as the post fell vacant after the death of Justice Radha Krushna Patra on January 28.The Commission’s probe is significant as the State Government had created a Rs.300 crore corpus fund in order to return money to the small investors cheated by a large number of chit fund firms.The Commission that was initially headed by Justice Patra was constituted on July 9, 2013 to hear the complaints of the depositors and take necessary steps for refund of the money the people had deposited with various companies.The Commission had received over 10 lakh complaints from people across the State.