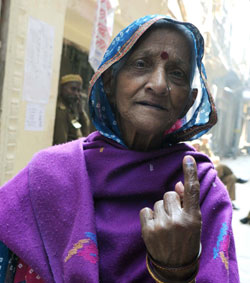 Odisha Channel Bureau New Delhi, Feb 7: A record voter turnout of over 67% was registered in the Delhi Assembly elections that went off peacefully on Saturday.The voting percentage was 65.6% in the last elections.The voting was by and large peaceful in the elections that witnessed triangular contests involving the BJP, Aam Aadmi Party and Congress.The main contest, however, took place between BJP and AAP in a majority of the total of 70 seats.The exit polls indicated that AAP has the chances of winning a majority of seats with the BJP finishing second and Congress third.“I am confident that AAP will win the elections and form government in Delhi,” said Arvind Kejriwal, who led AAP’s campaign.In case the BJP fails to win the polls and AAP emerges successful when the counting of votes takes place on February 10, the outcome will be a major setback for Prime Minister Narendra Modi, according to political analysts.