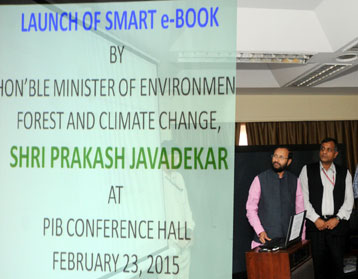 Odisha Channel Bureau Bhubaneswar, Feb 23: Even as destruction continues in many parts of India in the name of development, Union Environment Minister Prakash Javadekar launched his Ministry’s smart e-Book titled `Development without Destruction’ in New Delhi today.Speaking on the occasion, Javadekar said that the Ministry will work as a facilitator in pursuing the goal of sustainable development by bring in transparency, removing bottlenecks and encouraging people’s participation, according to a PIB press release.While outlining the vision for the ministry in 2015, Javadekar said that sustainable development without destruction and green growth and poverty eradication were the principles that would guide the initiatives and policies of the ministry.Unveiling his Ministry’s agenda for 2015, Javadekar said that bringing transparency in processes, bringing in time bound disposal of applications, stress on compliance through monitoring, public participation, priority for greening the degraded forest, providing ease of doing business by removing bottlenecks were being given high priority.He stressed the need for India to effectively put forward its stand in Conference of Parties – CoP21 that is scheduled to be held in Paris this year.Stressing that people’s participation was central to the developmental process, Javadekar said that his Ministry would initiate several public campaigns for turning degraded lands into urban greens, making the environment plastic bags free, restoration of lakes and rivers.Youth would be the special focus of these campaigns.While launching the e-Book of the ministry, Javadekar said that the Smart E-book designed to give maximum impact with least text using videos, audio and images.The e-Book will also be launched in Hindi and is friendly for the differently-abled.The smart e-book is mobile phone friendly and can be easily readable on all mobile platforms such as iOS, Android and Windows.The e-Book captures some of the important initiatives taken by the Ministry of Environment, Forest and Climate Change in the last eight months.It allows users to share the e-Book on various social media platforms such as Facebook, Twitter and Google+.This is the first of its kind smart e-Book that incorporates an audio book feature with text to help users listen to each topic in the Ministry.It contains an interactive feature of an Environment Wall showcasing the varied events which can be updated at frequent intervals.