Banajag Yatra to begin on March 29 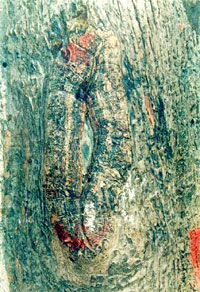 Odisha Channel Bureau Puri, Mar 20: The Shri Jagannath Temple Administration has released an elaborate schedule for the Banajag Yatra to locate and collect Daru (Neem wood) for the Nabakalebara of Lord Jagannath and his siblings.According to the programme, the Banajag team comprising of about a hundred Daitapatis besides priests, carpenters and other support staff and police would begin their journey from the Simhadwar, the main gate of the Shri Jagannath temple after getting ajnamallya from the Lords on March 29.On the way, the Gajapati King Dibyasingha Deb would wish them from his palace gate situated alongside the Badadanda.The Banajag team would stay at Jagannath Ballav mutt and on March 30 midnight they would start their Padyatra to Kakatpur Maa Mangala temple via Puri-Kornark marine drive road.On the way they would stay at Ramchandi temple near Chandrabhaga (Konark).On April 1 they would take rest at Sankareswar Shiva temple in Narua village.On April 2 they would reach Deuli mutt situated close to Prachi river near Kakatpur.On April 3 they would go to the Ma Mangala temple and perform yajna and offer prayers to Maa Mangala and return to Deuli mutt.From April 4 to May 17 they would locate and collect the four Darus of Lord Jagannath, Balabhadra, Subhadra and Sudarshan and return to Puri and Devasnan Poornima would be observed on June 2.From June 5 to 15 the carving of idols on the Neem tree trunks would be completed.Same day a special yajna would be performed in which the Gajapati King Dibyasingha Deb the foremost temple servitor would perform “Poorna aahuti”.In the dead of the night the transfer of Brahmas from the old Darus to the new ones would be conducted amid tight security and in utmost secrecy.The new deities would stay in the Anasar Pindee for over one month till observance of the Nabayouban Vesha of the new deities on July 17.The annual Rath Car (car festival) would begin on June 18.The Bahuda Yatra of Lord Jagannath (return car festival) would be observed on July 26.The famous Suna Vesha of the deities on the three chariots would be observed on July 27.The deities would enter the main temple on July 30 after they are offered Adhar Panaa on July 29.