Odisha Channel Bureau Bhubaneswar, April 2: The controversial Aahar scheme launched by Chief Minister Naveen Patnaik on the occasion of Utkala Dibasa, the foundation day of Odisha, has proved to be a big hit with the people.A visit to a few outlets in Bhubaneswar on the second day on Thursday proved the critics wrong.In fact, the Chief Minister’s gift to the people of Odisha on Utkala Divas has proved to be a huge success.Hundreds of people, with token for five rupees in hand, were seen in long queues braving the heat. 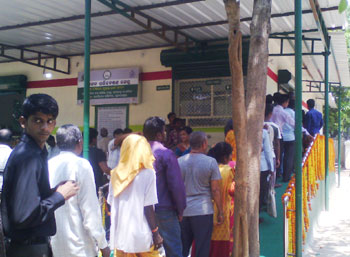 Keeping their self-esteem at bay, people belonging to all strata of society, were found waiting for their turn to eat rice and Dalma at a subsidised rate.People of all groups were seen waiting outside the outlets before the outlets opened for the day at 11 am to purchase tokens and wait in a long queue.The length of the queue then slowly increased.The scheme was primarily aimed at catering to the requirement of the poor people coming to the cities for their work.But the beneficiaries now include a large number of slum-dwellers, auto-rickshaw drivers and daily wage workers.Reports from other towns such as Cuttack, Rourkela, Sambalpur and Berhampur where Aahar was launched simultaneously also indicated that the scheme has proved to be a successful one to keep the people in good humour.That Aahar is aimed at maintaining direct contact with the people with the populist schemes of the BJD Government in the State also appears clear once one enters inside the outlets.The sign-boards put up on the wall of the outlets highlight different welfare schemes of the Naveen Patnaik Government.The State Government had gone ahead with the implementation of Aahar scheme even after it failed to arrange funds from the Central PSUs such as NALCO, SAIL and MCL.It remains to be seen whether the Chief Minister would be able to sustain the popularity of the cheap meal scheme by organising from the private companies and State Government run public sector undertakings.