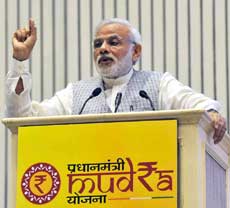 Odisha Channel Bureau New Delhi, April 8: Prime Minister Narendra Modi today said that supporting the small entrepreneurs of India is the biggest way to help the Indian economy grow and prosper.Speaking at the launch of the Pradhan Mantri MUDRA (Micro Units Development and Refinance Agency) Yojana here, Modi said that the MUDRA scheme is aimed at “funding the unfunded”.He said that the small entrepreneurs of India are used to exploitation at the hands of money lenders so far, but MUDRA will instill a new confidence in them that the country is ready to support them in their efforts that are contributing so heavily to the task of nation building.Stressing the contribution of small entrepreneurs in the economy, Modi expressed confidence that within a year’s time, the major banks would also adopt the MUDRA model.He said that in our country, one often experiences that things revolve around mere perceptions, while the details often paint a different picture.Giving the example of the perception that large industries create more employment, he said that a look at the details reveals the reality that only 1 crore 25 lakh people find employment in large industries, whereas small enterprises employ 12 crore people in the country.He said that while there are a number of facilities provided for the large industries in India, there is a need to focus on these 5 crore 75 lakh self-employed people who use funds of Rs 11 lakh crore, with an average per unit debt of merely Rs.17,000 to employ 12 crore Indians.He said that these facts, when brought to light, led to the vision for MUDRA Bank.The Prime Minister spoke about his time as the Chief Minister of Gujarat, when he focused on the environment-friendly cottage industry of kite making, which employs lakhs of poor Muslims.He said that he brought a research institute from Chennai on board which discovered that small inputs of skill development were needed in the industry.He said that he felt proud that these small efforts helped the kite-making industry grow from Rs.35 crore to 500 crores in Gujarat.The Prime Minister also gave examples of other small businesses that, with a little help, have the potential to grow manifold.He said that the biggest asset of the poor is his / her integrity (imaan).By combining their integrity with capital (MUDRA), it would become the key to their success – पूंजी सफलता की कुंजी.Speaking about women’s self help groups in particular, the Prime Minister said that the kind of honesty and integrity showed by these loan takers is seldom seen in any other sector.Modi appreciated the efforts made by the banking sector of India in making Jan Dhan Yojana a success.He said that he envisioned that within a year, banks would queue up to give loans to MUDRA applicants.The Prime Minister also congratulated SIDBI on the silver jubilee of its inception, and appreciated the work done by it in supporting India’s small scale industry in these 25 years.Modi also spoke about the possibilities of value addition in agriculture.He said that, we must aim at creating a whole network of farmers engaged in value addition at the community level.Brand building, advertising, marketing and financial support, when given to such small entrepreneurs will strengthen the foundation of the Indian economy, he said.He said that this will not entail any big changes in the existing structures, just a little empathy, a little understanding and a little initiative.He urged the banks to study successful models of microfinance, tailored to the local requirements and cultural contexts, which will be enable us to help the poorest of the poor in a big way.Modi said that mere launching of new schemes is not progress.Real success lies in real change on the ground, as was seen in the Jan Dhan Yojana and PAHAL, which had delivered concrete results within limited timeframes, he added.He said that the established financial systems will soon move to the MUDRA-model of functioning, i.e.to support entrepreneurs that give employment to a large number of people using least amount of funds.Union Finance Minister Arun Jaitley, Union Minister of State for Finance Jayant Sinha, and Governor of Reserve Bank of India Raghuram Rajan were present on the occasion.