Ambedkar: The man behind the idea of modern Indian nation 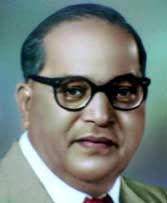 By Dilip MandalApril 14, 2015 will kick off celebrations of Babasaheb Dr.Bhim Rao Ambedkar’s 125th birth anniversary.Though Dr.Ambedkar’s stature and image is growing larger with time, his prominence as India’s foremost advocate of Dalit empowerment often does not do much justice to several sterling aspects of the man’s multi-faceted personality.Dr.Ambedkar was an economist par excellence and his work in this field had laid the foundation for the country’s central bank, Reserve Bank of India.He planned India’s first river valley project to generate power and irrigation facilities.As the chairman of the drafting committee of the Indian Constitution he was its chief architect.He had also drafter the far-reaching Hindu code bill to liberate vast majority of women and finally resigned from union cabinet when this bill was not passed by the Parliament.However, Dr.Ambedkar’s greatest and least known contribution was to be able to stretch the idea of the nation-state to include India’s vast diversity of people, cultures and their differing aspirations.For him, nation is a philosophical entity with shared dreams as its central theme. Academicians and scholars across India & the World are increasingly recognising Dr.Ambedkar’s role as the nation builder of modern Indian State.Dr.Ambedkar had written eloquently on his idea of nation and this is documented in Writings & Speeches of Dr.B.R.Ambedkar, published by Ambedkar Foundation, a central government sponsored body to carry on the work of Babasaheb and also by the education department of Government of Maharashtra.Dr.Ambedkar’s idea of nation is not only of a political or geographical entity, having a map and a flag.He didn’t subscribe to the popular definition of nation something as “large group of people living in one area with their own government, language, traditions, etc.(Cambridge Dictionary).” For him idea of nation has to have a philosophical and spiritual connotation with welfare, equity and fraternity as central themes.While explaining his idea of nation he had quoted French philosopher Ernest Renan saying that “A nation is a living soul, a spiritual principle.Two things, which in truth are but one, constitute the soul, this spiritual principle.One is in the past, the other in the present.One is the common possession of a rich heritage of memories; the other is the actual consent, the desire to live together, the will to preserve worthily the undivided inheritance which has been handed down.The nation, like the individual, is the outcome of a long past of efforts, and sacrifices, and devotion…A heroic past, great men, glory, these form the social capital, upon which a national idea may be founded.”Babasaheb, in his entire life tried to achieve this cherished goal of nationhood.For him, at that point of time in history, India was a nation in the making.He argued with another towering personality of his times, Mohandas Karamchand Gandhi on this issue.That great debate is now part of our national consciousness.Any evaluation of Dr.Ambedkar’s contribution should keep this philosophical and spiritual framework he had in mind for the sub continent.In his seminal but undelivered speech known as ‘The Annihilation of Caste’ he deliberated that a casteless society is prerequisite for a strong nation.Keeping this idea in the mind he led many social movements like Mahad Satyagraha for equal right to drink water from a public tank, temple entry rights movement and movement to burn the Manusmriti. He had warned that without having social and economic equality, our nation may face existential crisis.While concluding the debate in the constituent assemble, as chairperson of drafting committee, Babasaheb had said that, “On the 26th January, 1950, we are going to enter into a life of contradictions.In politics we will have equality and in social and economic life we will have inequality.In politics we will be recognizing the principle of one man one vote and one vote one value.In our social and economic life, we shall, by reason of our social and economic structure, continue to deny the principle of one man one value.How long shall we continue to live this life of contradictions? How long shall we continue to deny equality in our social and economic life? If we continue to deny it for long, we will do so only by putting our political democracy in peril.We must remove this contradiction at the earliest possible moment or else those who suffer from inequality will blow up the structure of political democracy which is Assembly has to laboriously built up.”It was to resolve these contradictions that Dr.Ambedkar laboured hard to push the idea of affirmative action for the deprived sections of the society and women.It sprang from his steadfast belief that there could not be sustainable liberty without equality and fraternity.“How can people divided into several thousands of castes be a nation,” he said.Forefathers of Indian constitution had agreed to Babasaheb’s view on the need to have reservations for oppressed classes.If we go through the constituent assembly debates, we can notice that there were practically no conflicting views on the issue of equal rights and affirmative action.In the case of the Hindu code bill prepared by Babasaheb, Dr.Ambedkar’s view to have equal rights for women in the family was later endorsed by the Parliament.Though in the initial phase there was resistance to this bill and sensing this baba sahib had resigned from the position of the law minister.For Babasaheb had famously said, “I measure the progress of a community by the degree of progress which women have achieved.”As Earnest Renan had rightly said that a nation must forget the bad memories of the past and cherish the dream of a shared future, the constituent assembly of India passed that test of having social equality and fraternity with flying colours.That’s the legacy we have, when we remember the great son of India, Baba Saheb Dr.Bhim Rao Ambedkar.Let’s all celebrate this year remembering the dream Babasaheb had for a great nation, called India.(PIB Features) Dilip Mandal is Former Managing Editor, India Today Group and Executive Editor, CNBC Awaz.(Views expressed by the author are personal)