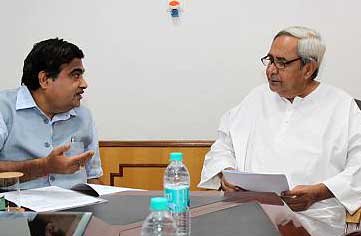 Odisha Channel Bureau New Delhi, April 13: Odisha Chief Minister Naveen Patnaik today urged Union Minister of Road Transport and Highways and Shipping Nitin Gadkari to approve the Coastal Highway from Gopalpur to Digha connecting several existing and upcoming ports including Gopalpur, Astarang, Paradip, Kirtania, and Chandipur.During his meeting with Gadkari here, Patnaik informed the Union Minister that Odisha is prone to frequent cyclonic storms and it is necessary to have a good coastal highway for efficient rescue and relief operations in the cyclone-prone coastal areas.The Chief Minister said that that these areas are also thickly populated and a coastal highway will provide alternative economic opportunities to the local population. Patnaik also informed Gadkari that two district headquarters towns of the State namely Jajpur and Jagatsinghpur are not connected with any National Highway Network at present.This is not consistent with the extant policy of Government of India which provides that all district headquarters of a State shall be connected with the National Highway Network.Further, Patnaik stated that the existing road network in the tribal nominated districts which suffer on account of Left Wing Extremism including Gajapati, Rajagada, Kalahandi, Nuapada, Bolangir and Bargarh requires urgent upgradation to national highway standard.He also urged the Gadkari to declare Kuakhia-Jajpur-Aradi-Bhadrak and Cuttack-Kandarpur-Jagatsinghpur-Machhanga State roads as new National Highways.The Palasa-Paralakhemundi-Muniguda-Bhawanipatna-Rajkhariar-Padmapur State road network may also be upgraded to national highway, he added.He stated that three new by-passes – near Bhawanipatna on NH-26, near Kotpad on NH-63 and near Manamunda on NH-57 – are essentially required to address the problem of severe traffic congestion.Patnaik also brought to the notice of Gadkari that the work on Gurupria Bridge has already started under Engineering, Procurement and Construction Mode.The Government of India has, however, sanctioned only Rs.45 crore for the project under RRP-I of LWE Scheme against the project cost of Rs.187.25 crore.He highlighted that the bridge is critical for connecting cut-off areas of Malkangiri district to the mainland, improving communication between Andhra Pradesh and Odisha and more importantly for preventing spread of Left Wing Extremism.He impressed upon the Union Minister to approve and sanction the balance amount of Rs.142.25 crore under RRP-II for ensuring timely completion of the bridge.Gadkari assured Patnaik that all the proposals will receive priority attention of the Union Government.He also assured that the proposal for construction of the Coastal Highway in Odisha will be taken up under Bharat Mala Scheme.