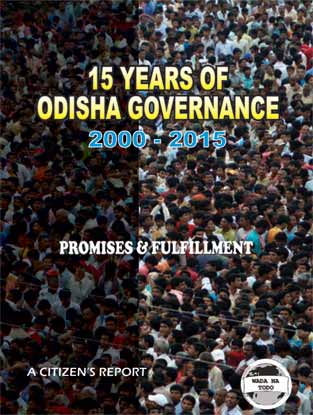 Odisha Channel Bureau Bhubaneswar, May 5: In last 15 years, Odisha has witnessed a metamorphosis in development, agriculture, and most importantly, in demography.The time period was also marred by many scams including the mining scam, which ran for almost nine years after the current government assumed power in 2000, according to a citizen’s report.The report, titled “15 years of Odisha Governance 2000-2015: Promises and Fulfillment”, is a compendium of various analytical reports focusing on a varied range of subjects concerning the poor and marginalised sections of the State.The report, which was released at a consultation on “15 years of Odisha Governance ‘Promises and Fulfillment” held in the city today, has been published by Wada Na Todo Abhiyan.Estimates suggest that the scams cost the state exchequer between rupees one lakh crore and five lakh crore.The land scam in the Twin City of Bhubaneswar and Cuttack also ran into several thousand crores.Several other scams, which surfaced, include chit fund scam, NREGA scam, dal scam, seed scam, mine scam, coal scam, chit fund scam etc.The review on corrupt practices in last 15 years analyses the magnitude of scams and government action in this regard.Despite implementing employment generation scheme of the central government and initiating its own schemes, the state has not been able to put a stop on increasing migration in Odisha, the reports says.According to the report, the condition of marginalised sections of Odisha during the regime has not been commendable.Several policy decisions and measures have been taken up in the last decade to benefit vulnerable groups such as women, tribals, scheduled caste communities, etc.The report on migration finds out that Odisha is a key migration source state with 937,148 inter-state migrants.It classifies migration as both distress and opportunity driven.The report recommends implementing the laws for providing safety to migrant labourers and initiating skill-based training of unemployed youth in towns which have seen rapid migration in recent times.It highlights the importance of role of Panchayat Raj Institutions (PRI) in preventing the exploitation of migrant labourers, especially of women and children, by ensuring registration of labour contractors, placement agencies and also of labourers at local level.Similarly, the report on land acquisition and displacement reveals that the government has not been able to make provisions for resettlement and rehabilitation for the people affected by development projects.The reports point out the upsetting trend of forced land acquisition.Odisha has been facing multifaceted problem of climate change that include environment degradation, mangrove depletion, Coastal erosion, declining green cover, and many other issues related to climate change.The review paper on environment points out that the government has initiated some unique measures in direction of carbon sequestration and combating climate change.Odisha became the first Indian state to implement the Climate Change Action Plan and, also, to pilot the project for carbon sequestration through micro-algae technology.Other review papers explore human rights violations, condition of children, state of education, agriculture, health situation, and implementation of welfare schemes initiated by union government and the state government.This compendium of review reports is not only aimed at demarking the problem areas but also intend to suggest possible solutions for inclusive development of Odisha in the line of Sustainable Development Goals proposed and advocated by the United Nations.Participating in a discussion organised on the occasion of the release of report, retired IAS officer Aurobindo Behera observed that this process will review and strengthen the democratic functioning of the State.People should ask and seek accountability from the ruling party about their promises made in their manifesto while contesting the election and make the government truthful on its promises, said Jagadananda, former RTI commissioner.Former Finance Minister Panchanan Kanungo opined that out of 1242 promises only 142 promised were fulfilled by BJD government in last 15 years. Congress spokesperson Ganeswar Behera shared that there are 36% of people who are poor and it’s unfortunate that Odisha has been placed in the lowest rank of poverty in these 15 years.High trafficking, farmer suicide and migration have become regular phenomena.Senior journalist Rabi Das eulogised the process of Wada Na Todo Campaign and said that this type of citizen’s watch should prevail across the state in order to have effective, transparent and accountable governance.BJP Legislature Party leader Basant Panda expressed that the present government is not at all concern for the interest of farmers, small scale industries and dependants of minor forest produce.These groups are becoming extremely vulnerable, he added.National campaign coordinator Pradeep Baisakh and State anchor Sashiprava Bindhani were present.