Odisha Channel Bureau Bhubaneswar, May 10: Well-known farmer leader and social activist Lingaraj, who recently quit the Aam Aadmi Party (AAP), announced here today that he and his associates have decided to be a part of the ‘Swaraj Abhiyan’ led by Prashant Bhushan, Yogendra Yadav and others.Lingaraj, who contested last year’s Lok Sabha election from Bargarh constituency as an AAP candidate, informed that he has already resigned from the primary membership of AAP along with all his active associates of farmer’s movement in Bargarh who had joined AAP with him. 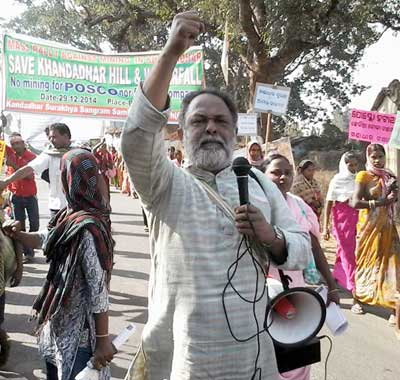 Swaraj Abhiyan was launched in a convention named Swaraj Samwad held at Gurgaon on the April 14 in the wake of the expulsion of four prominent and founding members Prashant Bhusan, Yogendra Yadav, Anand Kumar and Ajit Jha from AAP.According to Lingaraj, Swaraj Abhiyan is an initiative in continuum to reassert and rekindle the ideals and values of Swaraj for which AAP was formed three years ago.At present process of Swaraj Samwad, dialogues with activists and well wishers of AAP as well as seekers of alternative politics are being organised in different States, he informed.The former AAP leader informed that a State level Swaraj Samwad will be organised in Bhubaneswar on May 14.Yogendra Yadav, national spokesman and prominent leader of Swaraj Abhiyan will participate in the programme and address a public meeting in the evening, he added.“We arrived at a conclusion that Aam Aadmi Party under the leadership of Arvind Kejriwal has betrayed the hopes generated due to people’s immense good will for an alternative politics by behaving with utter arrogance,” Lingaraj said in a statement issued at a press conference he addressed here during the day.“The ideals of Swaraj have been muzzled on the altar of power seeking politics only.The historic necessity to formulate the policy and perspective of a formative political party has been thrown to dustbin by throwing out the leaders who were entrusted with the responsibility for the same.The Present AAP has metamorphosed into a party devoid of democratic values, internal democracy, idealistic politics and goal of Swaraj.”“We have resolved to be a part of ‘Swaraj Abhiyan’ and strengthen it at the national level led by Prashant Bhusan, Yogendra Yadav et al.and endeavour to bring together all likeminded individuals and forces at the state level for a platform of alternative politics,” Lingaraj added.