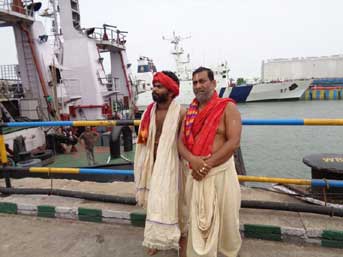 Odisha Channel Bureau Paradip, May 12: Taking break from their hectic Daru rituals at Kharipadia village in Jagatsinghpur district, servitors of Puri Jagannath temple have paid a visit to the Paradip port township.However, the group of priests preferred to skip their visit to the Paradip Jagannath temple where non-Hindus have unhindered access into it and are conferred the right to offer puja to the lords.Blanket ban on non-Hindus darshan is in vogue in Lord’s Jagannath temple in Puri.Entry of non-Hindus into the Puri temple has sparked off controversies in the past. “The priests were extended warm welcome by port officials.We accompanied them into the core area of the port where there is anchorage and berthing ships.The guests from Puri also witnessed the cargo handling operation,” said Deputy Conservator Paradip Port Trust Gouri Prasad Biswal.Bidyapati Narasingha Pati Mohapatra, Biswabasu Binayak Dasmohapatra, Daitapati Manoj Kumar Dasmohapatra and other priests were taken around by the police and port officials and they were put explained in plain words the various works of the port, the official said.“It is a good place to take a break from the busy schedule of the Nabakalebara work of the deities. All the three Darus of Lord Jagannath, Lord Balabhadra and Devi Subhadra were found in Jagatsinghpur district.The last Daru of Lord Jagannath was axed in village Kharipadia on Saturday for which some of the priests on Sunday visited the port in Paradip.We also visited the aquarium, light house and other important places in Paradip.On 13th May we will start our journey from the village Kharipadia to Puri with the Daru of Lord Jagannath,” said Bidyapati Narasingha Pati Mohapatra on Monday.The servitors of Jagannath temple of Puri skipped visit to the Jagannath temple as it lets non-Hindus into the lord’s abode. “As per the tenets of Jagannath cult, non–Hindus have no right to enter the temples as in the past many Muslim invaders destroyed many Hindu religious places.In Jagannath temple in Puri, Muslims and Christians are not allowed to enter the temple since time immemorial.It is wrong on the part of the priests and managing committee members of Jagannath temple in Paradip to allow the entry of all the people irrespective of their religions,” said Bidyapati Narasingha Pati Mohapatra.”In 1984, Indira Gandhi was not allowed to enter the temple of Lord Jagannath at Puri because she had married a Parsi, Feroze Gandhi, added Pati Mohapatra.The 60-foot tall ‘Aruna Stambha’ (the holy pillar erected near the temple entry gate for distant view of God) speaks the story itself.A concrete arch adorns the top of the pious pillar with the engraving of holy symbols of major religions like Hinduism, Islam, Christianity and Sikhism.Unlike elsewhere, the non-Hindus are conferred the rights to offer puja at the Lord and pull the rath here.In fact the gates of the Jagannath temple have been thrown open to Muslims and followers of other religions since temple came up here in early seventies, said Managing Trustee of the temple Baishnab Charan Mohanty.