Definition of news has undergone a change: Jaitley 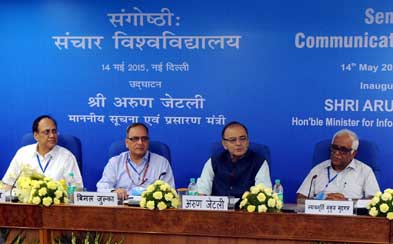 Odisha Channel Bureau New Delhi, May 14: Union Information & Broadcasting Minister Arun Jaitley has said that a structured training programme was important to address the needs of the fast evolving and expanding media landscape in the country.Skill development was an important step to cope with the challenges faced by journalists in responding to the requirements of varied target audience/viewers, Jaitley said while delivering the keynote address at a seminar on `Establishment of Communication University’ organised by the Indian Institute of Mass Communication, under the aegis of Ministry of Information & Broadcasting, here today.The discussion on the establishment of the Communication University would enable stakeholders to focus on the new and emerging facets of media world including the technological changes, innovations, skill requirements and the emerging needs of the media fraternity.The Minister said that the definition of news had undergone a change, with the media playing a pro-active role, setting the agenda for what constituted news.The influence of camera was evident in the prioritization of news across platforms.The impact of technology on news dissemination was evident in view of instant and faster communication.Touching upon issues related to financial modeling, the Minister said that the absence of a viable financial model at times created discrepancies leading to higher cost of distribution, race for eye balls and quality of content being compromised.Jaitley further added that the emerging scenario led to debates becoming shriller.However, enough scope existed for the reader / viewer to get authentic information and news based on facts.There was enough opportunity for conventional news to emerge stronger and counter news that was at times one sided.In the given scenario, the consumer was king as he had the power to dissect the news which was closest to reality.Secretary I&B Bimal Julka said that an approach to establishing a Communication University for India would have to be evolved after taking into consideration the best international models available vis-a-vis Indian Media and Entertainment sector.The seminar would involve consultations with various stakeholders for their views on possibility of establishing such an over-arching Communication University in the country, he added.In this fast emerging media scenario, there was an urgent need to have a close look at how the current generations would be equipped to meet the complex challenges in view of the increasing need and demand for professionals in the media industry, Julka said.Justice Mukul Mudgal, Chairman Broadcasting Content Complaints Council (BCCC) who was also present on the occasion said that the seminar would lead to deliberations to decide the feasibility of setting up a Communication University in India.The seminar seeks to explore the possibility of establishing a Communication University in the country, by attempting to enlist the views of major stakeholders, including universities and institutions in the government and private sectors, as well as leading practitioners in the field in three sessions.