Odisha Channel Bureau Berhampur, May 17: A large group of civil society organisations, activists and citizens have demanded that the government should put an end to coercive actions against NGOs, civil society and donors, without reasonable cause or due process, or seek to cripple the ability of these organisations to carry on their legitimate and sanctioned work. 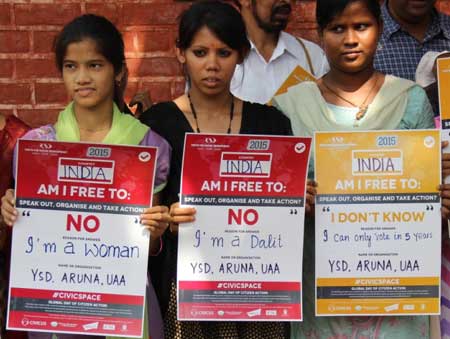 They have also urged the Centre to initiate an immediate dialogue between the NGO sector and Government to address the concerns of the civil society going forward.The demands were raised on the occasion of Global Day of Citizen Action here at Ganjam Kala Parishad where Youth for Social Development (YSD) along with other civil society groups and CIVICUS, a world alliance for citizen participation, organised a workshop and a peaceful demonstration on protection of citizen’s rights and create civic space for progressive dialogue with government.More than 10 civil society organisations, activists, and over 100 citizens including women, youth gathered to raise voice to create civic space also demanded that the Government should amend the presently opaque FCRA rules and regulations; ensure complete clarity and transparency on provisions and processes, as well as forums and mechanisms of redress; remove all provisions that are amenable to subjective interpretation; ensure their uniform application to all NGOs, trusts, foundations, and societies.“In many parts of India civic spaces are now under threat.It makes citizens and civil society groups voice slow down, restrict citizen’s freedom, make operations or financing for civil society groups difficult; increased the surveillance of ordinary citizens, activists and civil society organisations.Civil society also faces threats from non-state actors, including powerful corporate entities, extremist right- wing and fundamentalist groups,” the participants observed.