Odisha Channel Bureau Angul, May 24: A husband has allegedly clubbed to his wife to death on Saturday night for a very minor reason that she refused to part with Rs.50 to him. 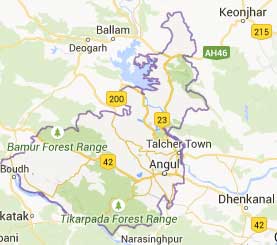 The woman, Bisika Sahu, happened to be the second wife of Bichhanda Sahu(46), resident of village Palasbahal under Rengali police station.Bichhanda, according to police sources, is working in Rengali Dam site as watchman He had first married about 20 years ago and has two children.However, two years ago he married his second wife who was related to him as sister-in-law.On Saturday evening, the accused asked his second wife Rs.50 but she refused to give.He got angry and allegedly beat her with a stick resulting in her death.An FIR has been lodged in Rengali police station by the father of the deceased that her daughter was clubbed to death by Bichhanda and his family and demanded action against them.Rengali police have brought the accused to police station and are interrogating him.“We have brought the accused to police station are currently interrogating him.The accused denying to have killed her but stating that there was a domestic quarrel on that night and after which she committed suicide by hanging.The quarrel might have taken place on the issue of money matter.We are verifying the matter and will do the needful as per the law,” said the inspector in-charge S.N.Patnaik.