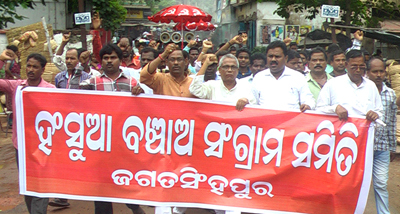 Odisha Channel Bureau Jagatsinghpur, June 21: Odisha Government’s green signal to the eight million tonne per annum capacity POSCO steel project for drawing water from Hansua rivulet has triggered protest.Protesters under the banner of Hansua Banchao Sangram Samiti opposing the government move staged demonstration outside the District Collectorate at the district headquarters town on Saturday.Locals united under POSCO Pratirodh Sangram Samiti and Hansua Banchao Sangram Samiti voiced angry protest and described that souring water from Hansua for industrial purpose would sound death knell for the farmers of Jagatsinghpur district.“Iron and steel industries are highly water-consuming ventures.It would steadily swallow the water from the rivulet leaving nothing for farming activities.Farmers would bear the brunt of such industrial use of water’, said HBSS spokesman Sashi Bhusan Bhuyan.The agriculture fields in Tirtol, Raghunathpur, Erasama, Biridi and Kujang areas of the district would starve for water once the POSCO draws water for the construction activity.A total of 50,000 acres of farmland would turn unproductive, he added.“Regardless of what the government decides, our stand against the South Korean steelmaker remains the same.Sizeable sections of people here are opposed to the project.Protest against the steel project has been launched today.Any move to draw water for carrying out construction work of the steel project would be stiffly opposed by locals of steel project villages and farmers of Jagatsinghpur district,” PPSS chief Abhaya Sahu.“Let there be industry.Farmers are not opposing the growth of industries.But the larger interest of farmers needs to be safeguarded in an agrarian state like Odisha,” observed Sunakar Rout, a local farmer. Jagatsinghpur Collector Satya Kumar Mallick said “people do have the right to protest.But the fact is that the water drawal from the Hansua rivulet by the company is not going to affect the agrarian activity.“The steel company would draw water from the rivulet only during the construction activity.Once the project is fully commissioned, it would draw water from Mahanadi for its daily requirement.Besides, the agriculture belts of Jagatsinghpur are supported by well-maintained irrigation canal system,” Mallick said. The surplus water of Hansua rivulet that is going in waste would be utilised by the steel company.Thus the apprehension of the farming activities being affected is unfounded, he added.