Odisha Channel Bureau
Bhubaneswar, June 20: The Federation of Hotel and Restaurant Associations of India (FHRAI), an apex body of four regional associations representing the Indian hospitality industry, will hold its golden jubilee convention at the Mayfair Lagoon and Convention in Bhubaneswar from September 25 to 27. 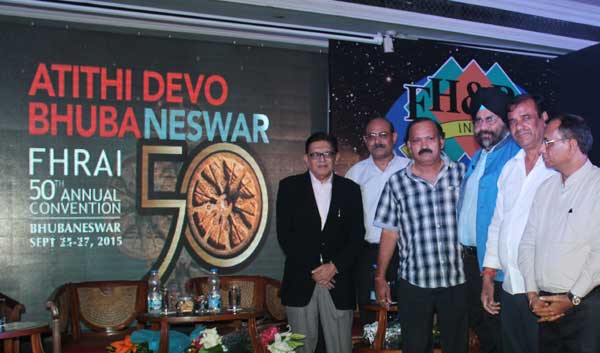 The three-day event is slated to be one of the biggest events in hospitality and tourism in India.Odisha Tourism has joined FHRAI as partners of the event.The convention theme is the much-adored Sanskrit verse `Atithi Devo Bhava’ meaning ‘Guest is God’.More than 1000 delegates representing the hospitality and tourism industry in India, leading hoteliers and other stakeholders in the industry are likely to participate in the convention.

The inauguration ceremony of the Golden Jubilee Convention will be held on September 25 and will be followed by a number of technical sessions where industry stalwarts will interact, discuss and debate the issues relating to growth of hospitality industry in India.The technical sessions shall be held on the two following days. The topics for technical sessions are being worked out and industry luminaries will chair the sessions and share their wealth of knowledge and experience with the delegates.The second day of the convention, September 26 will be the Odisha Day.Folk dances and cultural programs by well-known artistes from the state will be part of Odisha Day.

Since a large number of entrepreneurs from hospitality industry will be present, Odisha Tourism will make a presentation showcasing the potential of Odisha and invite them to set up hospitality and tourism ventures in the state.

On the concluding day September 27 coinciding with the World Tourism Day, a Heritage Walk will be organised in association with the Government of Odisha.The walk will essentially be a cultural extravaganza with tableaus, folk dances and performances.Invitations have been sent out to a number of foreign countries and different states in India to participate in the event.The theme of the walk will be ‘Tourism Unites the World’.

The thirteen states and a union territory comprising the eastern India have immense tourism potential and we are confident that this event will be a catalyst for the growth of tourism in the region.”Spread across the country, FHRAI has 3,876 members comprising 2,557 hotels, 1,216 restaurants, 99 associate members and four regional associations.The wide membership base makes it the world’s third largest association of its kind.It is the voice of the hospitality industry in India, which directly provides employment to more than 17 million people.FHRAI is committed to the industry’s progress and through its various activities like education and training, research and publications and annual convention to promote interaction with the Government, regulators and other stakeholders.