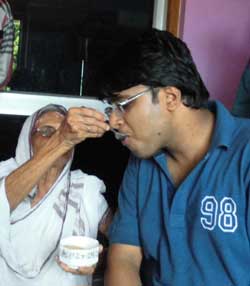 Odisha Channel Bureau
Kendrapara, July 7: A 23-year-old young man from Odisha’s Kendrapara town has cracked civil services examination in the first attempt. Of the 1236 candidates who came out successful in the All India civil services this year, Anshuman Mishra incidentally happens to be one of the youngest achievers.

Mishra, whose father Kishore Mishra is posted as pediatric specialist in district headquarters hospital here, completed MBBS at government-run Grant Government Medical College, Mumbai in April last after which he is continuing internship at the said medical college hospital.

Ranked 672 in merit list, Mishra said “I will give up my career as medical practitioner. I will join civil service. Right from childhood, I had set my goal to become a civil servant. My ambition has been fulfilled in the first attempt in the examination. However, I am disappointed over securing lower rank. My next target is to have another go at civil service examination so that I could make it IAS grade. With age on my side, I am hopeful of securing higher rank to attain IAS eligibility in future”, Mishra said.

“I had little time for civil service preparation due to hectic academic schedule of five and a half year of MBBS course. Still I am grateful to God for coming out successful in civil service. “My uncle Satyasai Rath, who is posted as additional income tax commissioner in Bangaluru, was a source of inspiration to me.

He had tasted success in civil service examination and he was my childhood hero. It was he who constantly prodded me to opt for all India civil service career,” he added. The members in interview board had flooded me with questions on Odisha’s economic backwardness, poor state of government-run health service network in the state, country’s foreign policy in the Modi-led NDA government.

Kishore Chandra Mishra, Anshuman’s father said “my son was hardworking right from childhood. His mother was forced to give up her job as college teacher to look after his studies. I was elated as the news of his success reached us”.