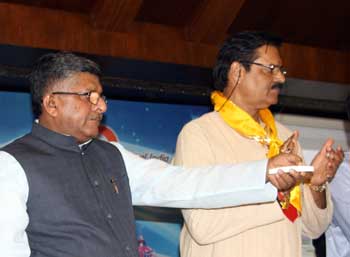 Odisha Channel Bureau Puri, July 10: Union Communication & IT Minister Ravi Shankar Prasad inaugurated Wi-Fi hotspot zone created by BSNL at Grand Road here on Thursday.The facility has been created by BSNL with the optical fiber backbone using GPON technology which can provide backhaul broadband bandwidth up to 100 Mbps through BSNL’s state of art MPLS network, BSNL would be providing free Wi-Fi services, for 30 minutes per 24 hours (three times in a month visitors can utilize in multiple sessions).After free usage limit of 30 minutes is exhausted, a customer can continue using the service on paid basis for which subscription plans are available in the denomination of Rs.30, Rs.50, Rs.90 and Rs.150 for validity of 30 minutes, 60 minutes, 120 minutes and one day respectively.BSNL has already extended similar Wi-Fi facility in the world famous Sun Temple at Konark.The Union Minister also inaugurated the new BSNL BHAVAN at Bhubaneswar which has been constructed at a project cost of approx Rs.17 crores.The office of CGMT Odisha Circle shall function from this building.He further added that BSNL is replacing 30 years old switching technology with the latest Next Generation Network (NGN) technology.In the initial phase already 12500 lines have been replaced and during 2015-16, 12750 lines have been planned to be installed. During the last financial year, 496 no.of 2 G BTS and 337 nos.of 3GBTS were commissioned.In the current financial year, 372 2GBTS and 193 3 GBTS have been planned to be commissioned, he added.In the LWE projects, 253 of 2 GBTS have been planned to be commissioned in the left wing extremist area of Odisha.The work is in full swing and is likely to be completed during this financial year.The National Optical Fibre Network (NOFN) project is going on full swing. During this financial year 3369 gram panchayats in 167 Blocks have been planned to be covered with broadband with project out lay of Rs.400 crores.This shall cover fifteen revenue districts namely Boudh, Cuttack, Deogarh, Dhenkanal, Gajapati, Ganjam, Jagatsinghpur, Kalahandi, Kandhamal, Kendrapara, Kendujhar, Khurda, Mayurbhanj, Nayagarh and Puri.During the current financial year, a project outlay of Rs.830 crore has been earmarked for BSNL Odisha for various projects including the Rs.400 crores earmarked for NOFN, the Minister informed.