Rajkumar Mohanty
Puri, Aug 1: Water scarcity gripped Sri Jagannath temple here on Friday as the two wells – Ganga and Jamuna – in the temple kitchen were unable to provide adequate water for cooking of Nilachal Abadha. The water level in both the wells specified for purpose has decreased to a great extent. 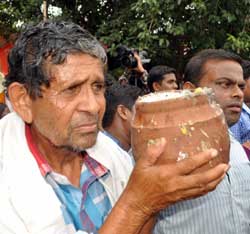 The deities after returning from their nine day sojourn to Gundicha temple were installed on the Ratnasimhasan of the main temple on the Thursday night.The temple priests had resumed their normal daily chores and rituals.On the Friday first cooked bhog was to be offered to the deities popularly called Nilachal Abadha.During the Rath Yatra when deities were on the chariots they were offered fruits and other dry bhog.

As a large number of devotees waited to taste the Nilachal Abadha on Friday, the temple cooks had to prepare huge quantity of bhog in the temple kitchen.Shortage of water in the kitchen wells put them in a difficult situation.The cooks met the chief administrator of the temple Suresh Chandra Mohapatra and conveyed the problem.A temporary arrangement was made out after consultation with the Sevayats.As per the arrangement the cooks were allowed to use other two wells located in the temple complex.

The public health department engineers, who were working to provide potable water for the temple kitchen, were yet to accomplish the job.Earlier on July 22 during the Rath Yatra when the deities were away in the Gundicha temple, the chief engineer public health Khitish Sahu along with PHD engineers had inspected the kitchen wells to ascertain the cause of water table going down.The engineers had informed the temple administration that they would try to install two dip bore tube wells near the wells to provide water or else necessary water would be supplied from the Talabania underground sweet water zone through a dedicated pipe line.

This arrangement, however, could not be made till Friday.Due to scarcity of water, Mahaprasad was prepared late in the evening on Friday and made available to the devotees after performance of a complex set of rituals.Meanwhile, the temple administration is considering a series of measures to recharge Ganga and Jamuna.The water level in the two wells had gone down due to insufficient rainfall in Puri in the recent weeks.