NALCO to give hot metal to Aluminium Park 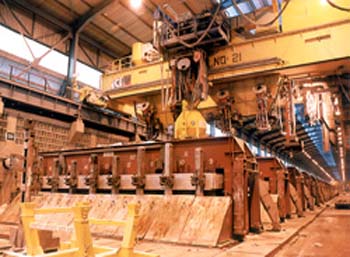 Odisha Channel Bureau Bhubaneswar, June 26: National Aluminium Company Limited (NALCO) on Thursday reiterated its commitment to supply hot metal to the proposed Angul Aluminium Park, which is a joint venture between NALCO and Odisha Industrial Infrastructure Development Corporation (IDCO).It may be mentioned that the Department of Industrial Promotion and Policy, Government of India has recently agreed to provide a grant-in aid of Rs.43 crore for the development of the physical infrastructure and common utilities in the Angul Aluminium Park.After this nod, IDCO had sought commitment from NALCO to provide raw material support to the downstream units to be located in the park.Though NALCO is operating at reduced capacities, due to the difficulties in getting adequate supply of coal for its captive power plant, the company has agreed to supply 50,000 tonnes per annum of molten metal initially to Angul Aluminium Park for promoting downstream industries, the company said in a press release issued in Bhubaneswar. NALCO may consider enhancing the quantity once the Utkal-E Coal Block (allotted to NALCO) gets operational, which is presently delayed due to several hurdles and requested the State authorities to intervene to remove such hurdles, according to the release.