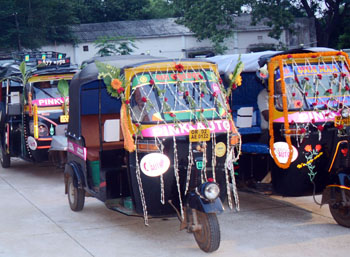 Odisha Channel Bureau Bhubaneswar, June 27: Odisha Chief Minister Naveen Patnaik inaugurated the pick auto-rickshaw service for women in the Capital city of Bhubaneswar on Friday. Patnaik flagged off the auto-rickshaws which will only ferry women passengers at a function organised at the Police Commissioner’s Office here.A total of 200 auto-rickshaws have joined this special service for the fairer sex.Speaking on the occasion, the Chief Minister urged the police to deal with the cases of atrocities against women with a firm hand.Police should give special attention about protecting women and pay attention to their grievances without delay, Patnaik said.Stating that his government was committed to create a safe environment for women, Patnaik said while four lakh girls were provided self defence training last year and a sum of Rs.6 crore had been allocated in the budget for the purpose for this fiscal.“This is another women friendly project after the women-only city bus project.It is a novel idea to provide secure alternative travelling to women in the city.In the face of increasing atrocities on women in the entire country in recent years, we have to explore all possible means to ensure a secure environment for women,” Patnaik said.“Crime against women not only disturbs society but also has an adverse impact on the morale of women.I believe this Pink Auto Project will make travelling a safer experience for women,” he added.The special service started with the active cooperation of the Commissionerate Police, Paradeep Phosphates Limited, Piaggio Vehicles and the city auto-rickshaw association.The pink auto service, which was launched in several cities of the country earlier, was launched in Odisha for the first time on Friday.