Odisha Channel Bureau Bhubaneswar: The Indian National Trust for Art and Cultural Heritage (INTACH), Odisha has launched the project `Listing and Documenting the Monuments of the Jagannath Sadak in West Bengal’ at Kolkata today.The project was launched by Keshari Nath Tripathi, Governor of West Bengal at the Raj Bhavan in Kolkata. 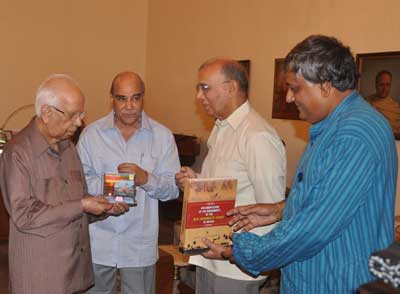 INTACH had earlier undertaken and completed the Listing of the Monuments of the Old Jagannath Sadak in the Odisha stretch and a report was prepared which was released at Bhubaneswar in July 2014.The report had listed 200 Monuments of the old road, starting from Jaleswar to Puri. The Government of Odisha had envisaged keen interest to get the report published.The Jagannath Sadak was the old pilgrim road from Kolkata to Puri.It took form sometime in late 1700’s and was the lifeline for all pilgrims who came to the Lord’s abode at Puri.It was, from 1825, known as the Orissa Trunk Road, but for the devotees who descended on this path on their way to Puri, it has always been the Jagannath Sadak.The road wound its way touching Midnapore, Chanderkona, Tamluk, Belda, Dantan, Balasore, Bhadrak, Jajpur, Cuttack, Bhubaneswar and Pipili.The travellers covered the distances by bullock carts, hackneys, palanquins, horses and elephants, but most of them trudged on foot.There were many amenities for the pilgrims and travellers.There were dharamshalas, wells, tanks, culverts, bridges, temples, rest sheds, Ghats etc.Many remnants of these are still visible on the isolated stretches of this once grand road.With the advent of the railways in 1892, the Jagannath Sadak fell into disuse and over the next few years was lost forever.The railways shortened the travel time from three weeks to eighteen hours.As it was a coastal road, many stretches of the road just vanished with time, it was encroached upon by villages and some lengths now form the NH-5 and the railway.A four man delegation comprising of INTACH’s Odisha State convener A.B Tripathy, adviser Odisha State Chapter Ananta Mohapatra, West Bengal chapter convener G.M.Kapur and the Coordinator of the Project Anil Dhir presented a volume of the Odisha stretch report to the Governor.The Jagannath Sadak played a very important role in the formation of the State of Odisha and the cultural links developed with Bengal.The listing will help in creating awareness of the history of the Jagannath Sadak and help in conserving and preserving whatever is left of this great road, according to Dhir.Out of the 516 km of the old road, 200 km was in West Bengal.While most of the remnants of the Jagannath Sadak have been wantonly destroyed, there are still nearly 100 remnants of the old road that are still there in West Bengal.