Odisha Channel Bureau PARADIP: Two war ships were thrown open in Paradip for public to catch glimpse of prowess of country’s naval forces.Enthusiastic and animated visitors including a sizeable number of school children had a heart-throbbing experience.“Patriotic fervour gripped me as I stepped into the warships.It was exciting experience.It was a learning experience on my part on naval warfare.The navy personnel elucidated the basics of naval operational techniques,” narrated Chinmay Rout, a student of Paradip-based school.My nine-year-old younger sister Archana was sad.She could not make it to board the warships as the navy people had put minimum ten-year-age bar, he said. 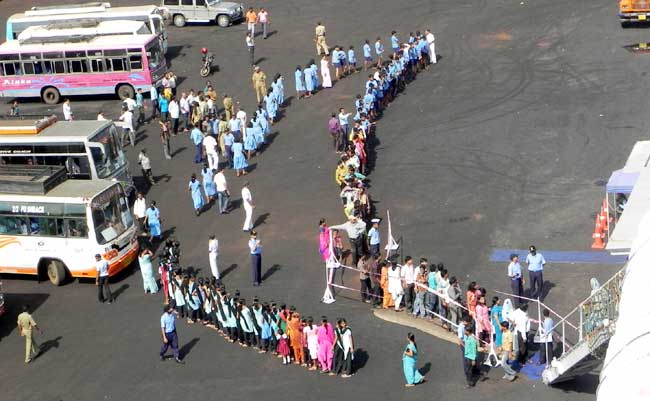 Warships were for public display.The objective of such exercise is to give the people the exposure to naval operation, said a naval commandant.Both the warships armed with formidable array of weapons, sensors and anti-ship sea skimming missiles in their armories and guided missile corvettes stood tall and majestic as visitors were able to see and understand the various aspects of a Naval ships from very close proximityPeople of all walks of life including school children grabbed the opportunity to have a close look at the technical wizardry of country’s naval warships. The operational demonstration and technical infrastructure of country’s naval power left many awe-struck.“Our objective was to make the people aware the navy’s preparedness to safeguard country’s security and sovereignty.Besides exposure exercise of this nature also aims at imbibe patriotic spirit in youths,” added the commandant officer.“There was heavy rush of enthusiastic people.The assembly of crowd mostly comprised school children and youths of 18-25 years’ age-group.Visitors were subjected to mandatory security screening,” he said.“Curious school children were inquisitive and put interesting questions on the naval operational system.The personnel patiently explained the technical aspect of the operation of warships, rocket launchers and missiles.We were pleased to find that people evinced interest and displayed inquisitiveness to know more and more about of naval operation,” he noted.“I boarded on the warship.It was a giant structure.Never before had I seen a warship.Earlier I had boarded on a merchant ship at Paradip port.The mighty and capability of it left me stupefied,” observed Arun Mahapatra, a local resident.“The security check at the entrance was irksome.But the exciting experience of watching the warships closely was too tempting and exciting to resist.The naval personnel were very courteous and polite.They guided everybody and put everything in plain words.The complexities of weaponry of warships were elucidated by them in a simple manner,” narrated another visitor, Radhakanta Mohapatra.