Odisha Channel Bureau SAMBALPUR: As the global leaders prepare to strike a new deal to fight climate change during the Conference of Parties 21 (CoP21) meeting at Paris, farmers from drought affected districts of Nuapada and Bargarh organized a “March to the Crop Field” on Sunday asking the world leaders to make a definitive climate deal that reduces global warming and greenhouse gases and support small and marginal farmers in adapting to negative impacts of climate change. 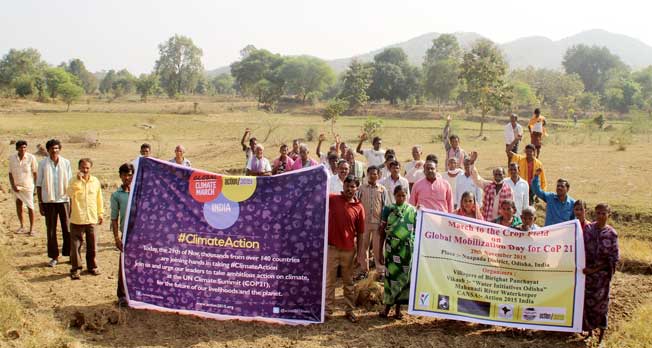 This march was organised at two places – Kharamal village in Bargarh district and Kushmal in Nuapada district of Odisha.About three hundred villagers, including women and children participated to send out their message to the world governments to save small farmers from vagaries of climate change by signing a strong climate deal in Paris.The drought-hit farmers said that small and marginal farmers are facing the maximum impacts of climate change and as a result are losing on their livelihoods, resorting to distressed migration and even committing suicides due to crop failures and other reasons. They demanded that the governments at CoP21 should finalize a deal that arrests global warming and help small farmers to fight the impacts through schemes and programmers suitable for the small farmers.The farmers urged the governments to support local agro-ecology based farming projects and programmes and support decentralized water harvesting and management systems.They demanded that the governments should end corporate control of the farm sector including their control of seeds, and promote organic farming.They also want the governments to ensure local farm based enterprises owned and operated by small and marginal farmers with all kind of support provided to them.“We want the governments to ensure best remuneration to farmers for their produces and insure all crops and farmers irrespective of land ownership, with adequate and dignified insurance amounts.” They urged the governments to provide assured irrigation, cold storage facilities and ensured marketing of farm produce to the farmers.“We want the governments to help the farmers fight with all sorts of disasters such as droughts, floods and cyclones and support farmers in their coping and resilience efforts,” they demanded while adding that climate change adaptation programme like the MGNREGA should be strengthened.Water Initiatives Odisha (WIO) and Mahanadi River Waterkeeper facilitated this action along with Vikash, Khariar; CANSA and Action2015India as part of a global mobilization day organized throughout the world by thousands of common people including small farmers, landless labourers, fisherfolks, forest dwellers, concerned citizens, social activists, civil society organisations and others who want the global leaders to take a strong decision to deal with climate change.