This first Mega Watt-scale solar installation of SAIL, implemented by the power distribution department of RSP, is in the final stage of commissioning and has already started solar power generation. 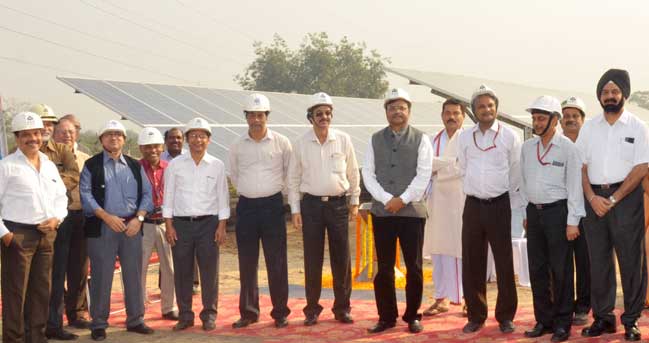 Set up at an expenditure of Rs.6.68 crore to meet renewable power obligation of the plant the solar installation has total 3465 poly-crystalline photo-voltaic solar modules and is expected to generate minimum 1.479 Million Units (MU) of solar energy per annum. The solar modules are mounted on 83 numbers of module mounting structures.Each solar module is rated for 290 Watts.There are 15 string inverters to convert the DC power to AC power.The AC power is then stepped up to 6.6 kV through one 1600kVa transformer and then connected to the plant’s power network.

The unit is spread over an area of 4.6 acre near refractory stores.RSP is also installing various other facilities for production of green energy.Two 5kW rooftop solar PV power generation systems have already been installed at main administration office building and ED (Works) office building. Seven more such systems are in the pipeline.Feasibility study for installation of grid connected roof top solar systems on major public buildings in the steel township and steel plant is also being conducted.RSP is also in the process of setting up on 15 MW Hydro power project on downstream of Mandira Dam, in collaboration with GEDCOL. This first MW-scale solar installation of SAIL was inaugurated by S.S.Mohanty, Director (Technical), SAIL on Sunday (December 6).