Odisha Channel Bureau Bhubaneswar: A mock drill exercise was conducted at the Biju Patnaik International Airport here on Tuesday to check the efficacy of the contingency plan to handle unlawful interference to civil aviation. 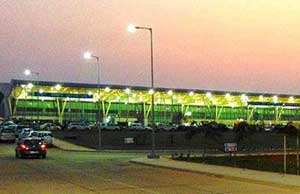 This was an annual exercise to revamp the security mechanism and operational preparedness at the airport to make it safer, according to an official release.A simulated flight from Delhi to Kolkata was made to mock hijack by a pseudo terrorist group and was forced to land at Bhubaneswar airport.The first information was conveyed to the ATC by the pilot of the pseudo aircraft.Immediately the whole security apparatus of the airport got activated by the authorities.Sharad Kumar, Airport Director on receiving the alert message immediately activated the Aerodrome Committee at the Airport.Officials of AAI, CISF, Airlines, State Police, BBDS and State IB assembled at the airport to take stock of the situation and guide the Air Traffic Control for resolving the issue.After landing, the pseudo aircraft was guided by the Air Traffic Control to the Isolation Bay where the aircraft was cordoned off by the CISF Personnel.The pseudo aircraft was immobilized by placing other vehicles on its path.The Aerodrome Committee chaired by Principal Secretary to the Odisha Government’s Department of Home Asit Kumar Tripathy negotiated with the pseudo hijackers and after a protracted deliberation brought the situation to a conclusive and safe end.The mock drill commenced at 1530 Hrs and concluded at 1648 Hrs.Observers for the drill were detailed by all the stake-holder agencies to observe the performance of the drill.All the observations from different sensitive points were discussed and noted for necessary improvement in the future drills.This type of exercises should be conducted regularly and the security apparatus must be updated keeping the threat perception in our country in mind, said Tripathy.