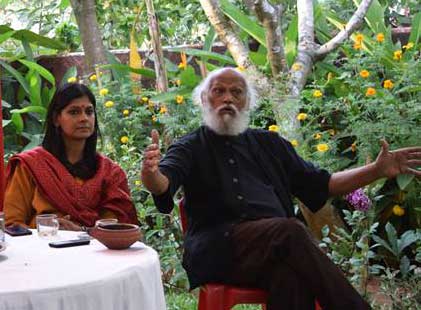 “Art is the expression of emotion, thought and any creative attempt.Before the advent of words and alphabets, there was art.It is the manifestation of our finer sensibility,” said Patnaik.“Art is not only about shape and colour, but also incorporates our dream, struggle, progress, thus making it mingled in our lifestyle.Art is always language secular,” Patnaik said. Stating that art and crafts have their presence in the lifestyle of Odias, Patnaik said Odisha is gifted with a number of talented artists who belong to traditional as well as contemporary world of painting, sculpture, dance music weaving etc.“We have experts, master craftsmen and hereditary practitioners of various forms of arts and crafts and music.Ours is a veritable treasure house of many traditional and folk dance forms,” he said.Expressing his gratitude to well-known painter Jatin Das for his personal efforts to promote art and artists, Patnaik announced that Odisha government will fully partner this annual film festival on art artists from next year onwards.“Odisha’s greatest treasure is its rich cultural heritage, and we must make all possible efforts to put it on the art map of the globe,” he said, while adding that JDCA’s expertise in bringing quality films will benefit the art lovers, filmmakers and audiences at large. The Chief Minister said such a festival will go a long way in documenting and preserving Odishan art, artist and culture for prosperity.He expressed hope that JDCA in collaboration with the State government will extend its documentation service to cover innumerable artists and artisans who practice their crafts in the villages and towns of Odisha.“I look forward to JDCA and the Odisha Government partnering to create a vibrant atmosphere where we can truly celebrate our art and artists,” Patnaik said.The festival, being held at the IDCOL Auditorium, will continue till January 17.As this year’s festival is focussing on Odisha’s heritage, Odissi tribal and folk performances, exhibition of Odisha craft and textile and sampling of Odia cuisine have been made an integral part of the three-day event.About 40 selected films will be screened at this unique festival which is being attended by eminent artists, art lovers and film makers from across the country.