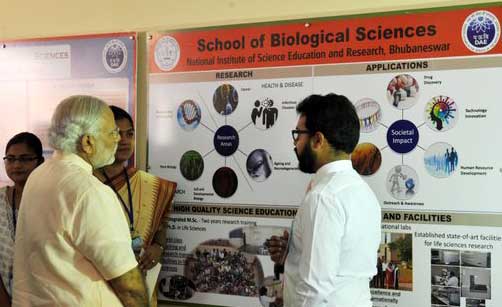 Odisha Channel Bureau Bhubaneswar: The new campus of National Institute of Science Education and Research (NISER) was inagurated by Prime Minister Narendra Modi at Jatni near the city this morning.In his inagural address, Modi said that the moment innovation stops, systems lose their life.“Innovation is the need of the hour, for every society and every era,” he added.“Bricks and cement don’t only make buildings.Oneness with people make institutions centres of inspiration Our scientists & professors are always thinking about doing something or the other that is new.They are researching & innovating always,” the Prime Minster observed.Apart from greenery, the NISER campus should think about solar technology, zero discharge, Modi added.Among other who were present on the occasion include Odisha Governor S.C.Jamir, Chief Minister Naveen Patnaik, Union Ministers Jual Oram and Dharmendra Pradhan and other dignitaries.Established in 2007, NISER, an autonomus institute under the Department of Atomic Energy (DAE), earlier functioned from the premises of Institute of Physics near Acharya Vihar Square.The foundation stone of the persent campus of NISER was laid by the then Prime Minister Manmohan Singh in December, 2009.Modi also interacted with the students and the faculty members of NISER after formally inagurating the permanent campus of the institute.The Prime Minister, who spent the night at Raj Bhavan after arriving from Visakhapatnam last night, also planted a sapling at Raj Bhavan in the morning before leaving for NISER.After inagurating the NISER campus, the Prime Minister flew to Puri where he is scheduled to offer prayers at the Jagannath temple.From Puri, Modi will fly down to Paradip where he will dedicate to the nation IndianOil’s Paradip Refinery.Modi will also address a public meeting at Pardip before departing for Visakhapatnam in the afternoon.Thousands of supoprters and workers of both BJP and BJP are likely to gather at Modi’s rally at Paradip as both parties are trying hard to take credit for the establishment of the refinery.