Naveen extends Aahar to all districts 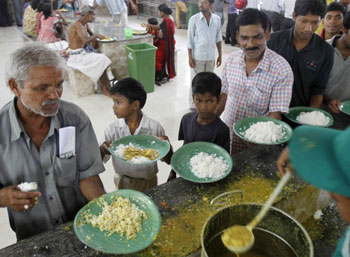 Odisha Channel Bureau Bhubaneswar: After testing success of the rice at Rs.2 and then Rs.1 per kilo scheme that helped him achieve victory in 2009 and 2014 elections, Odisha Chief Minister Naveen Patnaik today extended the Aahar cheap meal scheme to all districts of the State.Patnaik had launched the Aahar cheap meal scheme in five cities such as Bhubaneswar, Cuttack, Berhampur, Sambalpur and Rourkela on April 1 last year.This cheap meal scheme under which cooked food is being provided to poor people at the rate of Rs.5 per meal during lunch time is sponsored by State government undertakings and private companies operating in the State.Patnaik dedicated the 100 Aahar centres to the public at a function held at Cuttack city on the occasion of Ambedkar Jayanti.Above 60,000 people visiting urban areas of the State will get cheap meals every day under the Aahar scheme, Patnaik said.As many as 21 Aahar centres were being run in the five cities where the scheme was launched last year.With the launching of 100 centres, Bhubaneswar and Cuttack will get additional five and four Aahar centres respectively.Opposition Congress and BJP have criticised the extension of Aahar scheme to all districts of the State.Both parties are of the view that Patnaik was extending the scheme with his eye on votes.